Shut up and vote 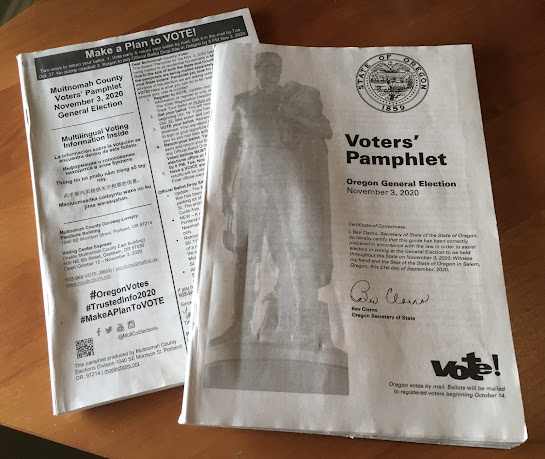 Since the ballots are in the mail here in Portland, and people are going to vote early, I guess it's time to say how I'm voting. There is a heck of a lot to cast a vote on this time around. Here's where I stand at this point. I'm open to being dissuaded.

I'll start with my enthusiastic choices:

New county income tax, 26-214: No. I know, it's "for the children," and I know, it's only on high-income people, but once it's in, they'll ratchet it down to pick up the middle class. And who needs the county getting involved with schooling small children? We have school districts and educational service districts galore. This is just another end run around the property tax limitations in the state constitution. Don't go for it.

Portland police accountability reform, 26-217: Yes. It's probably illegal because it violates the police union contract, but the cop union needs to hear the message loud and clear. And when their contract gets thrown into arbitration, the faceless, unelected arbitrator needs to hear the same message equally loud and clear. So do the folks in the state legislature, who could fix a lot of the problems if they really wanted to.

Portland Water Bureau spending on non-water-related garbage, 26-219: No. Portland water bills are obscenely high, and increasing all the time, and that's after the Water Bureau was busted in court for illegally spending water revenue on junk, which is forbidden by the city charter. The existing rules are there for good reason. Don't change them.

Cigarette, cigar, and vape taxes, 108: Yes. How we as a country ever let vaping get started is beyond me. Tax the hell out of it. I wish they would have left the traditional smoke out of it; those poor addicts are already hammered enough by taxes.

And my final enthusiastic choice: No Republicans for anything, ever again. That should take care of a lot of the remaining races (including Jeff "Mitch Eats My Lunch Daily" Merkley).

So there – that's what I really want to vote on.

I'm less enthusiastic about some of my other votes, but here's where I'm going at the moment.

Multnomah Circuit Judge: Adrian Brown. When in doubt (and I don't know that much about either candidate), I go with the alumna from the school at which I teach. ***UPDATE, a few days later: I have changed my mind on this race. See discussion and comment here and here.***

Portland schools construction bond, 26-215: Yes. Reluctantly. Only because it's high time our nasty, incompetent school board spent some money on Benson High School, rather than dismantling it. Jefferson deserves to get fixed up, too. But sheesh, it's another $1.2 billion (not a typo) on the backs of property owners.

Campaign finance reform, 107: Yes. What the heck, let's get the corporate juice out of politics as much as we can.

Decriminalize possession of heroin, cocaine, meth, LSD, ecstasy, 110: No. Running around with 40 units of methadone, a gram of heroin, and two grams of coke in your pocket should get you more than a minor traffic ticket. I like the funding part of this, but the decriminalization goes too far. Get the treatment capacity up first, and only then back off the criminal laws. Forty units of methadone? Really?

Magic mushrooms as a prescription drug, 109: Undecided. I'm suspicious of this. I do think it will lead to more of this stuff out on the street where the high school and college kids get to try it for funsies. I'm leaning no.

Am I missing anything important?