Two sides of a candidate

One of the election mailers we got yesterday was from Adrian Brown, candidate for Multnomah County Circuit Court judge. On one side of the mailer is an impressive collection of endorsements: 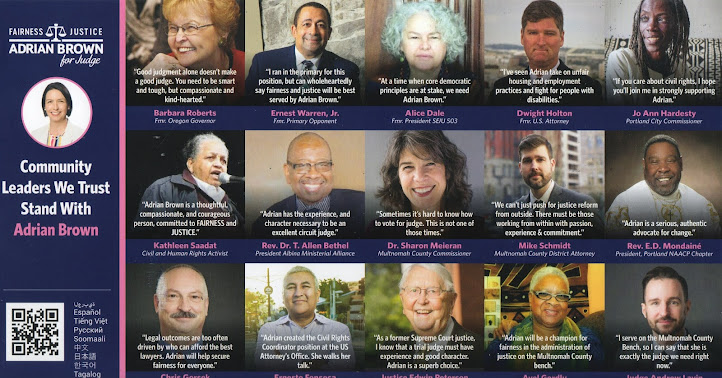 I wish she had left it there. But when you flip the flyer over, there's a comparison piece with her opponent that comes awfully close to being (a) partisan, and (b) negative. What do you think? 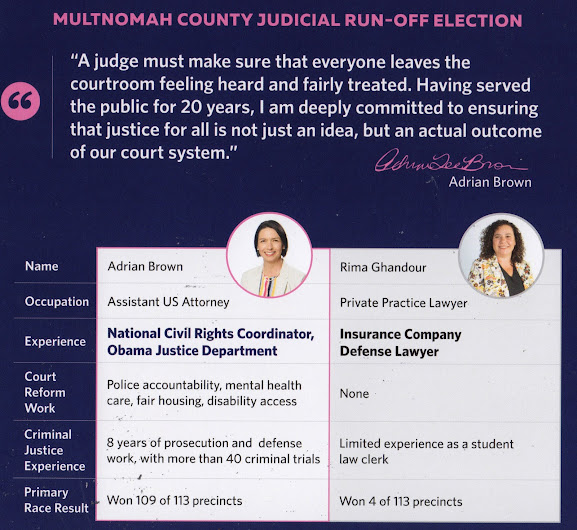 Wait, the "Obama Justice Department"? As opposed to the "Trump Justice Department," where she currently works? Right now, I have some major, major problems with the U.S. attorney for Oregon, Billy Bob Williams. If you work for him, you should take the heat for what he's doing. Don't go throwing "Obama" around.
The other thing that caught my attention yesterday was this unflattering story in Willamette Weed about Brown's objectionable use of Judge Ann Aiken's image in campaign communications. I didn't like the candidate's response when called out on it, either.
These issues sadden me. I don't like that we elect state and local judges here in Oregon. It's really unseemly that they have to win a popularity contest. The federal system gets it right. Judicial campaigns are a real tightrope walk for the candidates. But I'm seeing some stumbling by Brown here, and I'm switching back to undecided on this race.
Labels: City of Portland Law National Oregon