It was an eerily quiet night on the protest front here in Portlandia last night. Apparently a group of demonstrators assembled at Duniway Park, down by the old YMCA, and then marched around downtown for an hour or two. As far as I can tell, that was it. The cops complained that the marchers blocked traffic. Compared to most nights for the last three months, that was nothing.

Speaking of blocking traffic, here's an interesting new article in the Merc from one of the tweeters who attends most protests and sends out video in close-to-real time. The writer questions the common Portland police practice, which I have noted here a few times, of slashing tires on vehicles around protests. If you're not driving away fast enough for the officers' liking, it's hard to see what is achieved by bringing your vehicle to a halt. Other than putting you out 600 bucks. 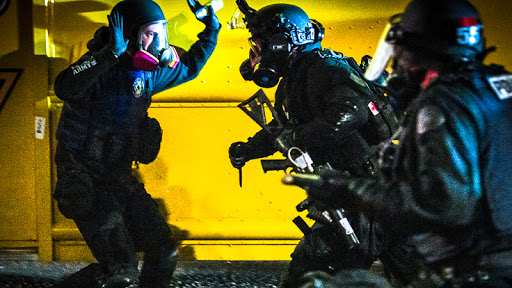 Not mentioned in the article is the fact that the cops sometimes also smash out windows on the same vehicles. The cruelty is the point, I think.

But the big protest news of the morning is that our tough-guy U.S. attorney, Billy Williams, announced yesterday that federal charges are being brought against 74 people for offenses committed during the protests.

I'll spare you Williams's rhetorical flourishes, some of which are almost comical. The charges range from arson and assaulting a federal officer, which if proven are serious offenses, to junk like "creating a hazard on federal property" and "failing to obey a lawful order."

But it doesn't seem that any of the charges are new. For the month of August, only two charges are listed. It's as if Williams just decided to make an announcement yesterday afternoon. Gee, could there be a political motivation?

Williams was 100 percent behind the federal stormtroopers' overblown occupation of downtown, and now he's going to play the role of Barr's local enforcer, just in time for the Presidential election. If Biden wins, Williams's number may be up. There'll be no objection from me.

UPDATE, later that morning: Oh, and how could I forget? A split panel of the Ninth Circuit threw out the preliminary injunction forbidding federal officers from hustling members of the media away from protests. It's an interesting case, but the legal developments are unlikely to change much that happens on the ground. The federal paramilitary, Trump's private army, don't seem too good at obeying court orders.