Two steps back at Portland protests

It wasn't a good night at the Portland protests last night. Tuesday night had been so mellow. But 24 hours later, it was back to Crapshow City.

The scene shifted back downtown, to the Justice Center and the federal courthouse. Some of the demonstrators started in with the taunting fires and big fireworks near the temporary security fence around the courthouse. And the Portland police and state troopers came roaring out, declaring a riot, doing their "bull rush" routine, and shooting quite a bit of tear gas at the crowd as they pushed it up Main Street to the Park Blocks and beyond.

I didn't see any federal paramilitary involved, but I must confess, I wasn't as glued to the Twitter as I once was. A number of protesters were arrested.

The Timbers Army van was on the scene once again, and the cops slashed its tires during the "bull rush." 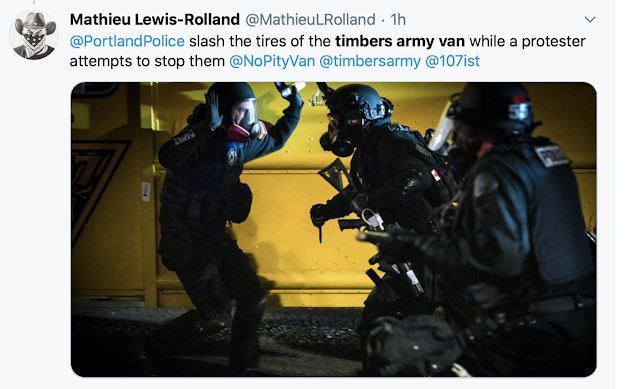 Some in the crowd threw stuff at the police, including a fair amount of paint in balloons. When the cops shot the tear gas canisters at the protesters, the protesters, many of whom were wearing gas masks, threw them back. One observer wisely noted that this was as close to a Wimbledon experience as 2020 will allow us to get.

It was really depressing to see the riot police storming up Main Street, in a cloud of tear gas, through the Performing Arts Center complex, pushing and clubbing civilians who were wearing helmets and masks and carrying shields. That location is a supposed to be a place of grace, where we get in touch with high aspirations. To me, last night's scene was a sacrilege. 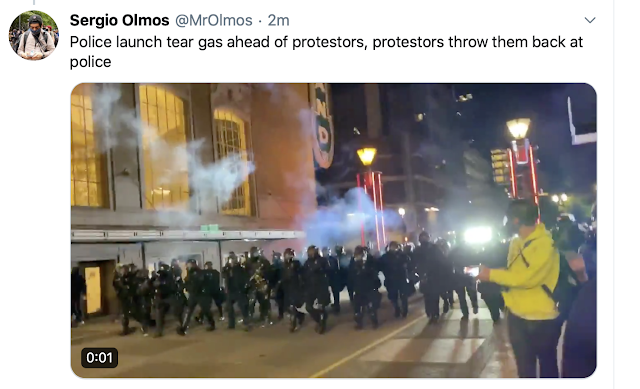 Sadly, I don't see an end to the troubles any time soon. Definitely not before the election in November and the onset of winter weather. There's no reasoning with some of the people at the protests. And they have no leader with whom the city can cut a deal. That absence is deliberate.

The beat goes on. This town really has lost its mind. I continue to hope and pray that I'm not writing about a funeral after one of these nights.

Meanwhile, an alert reader has directed my attention to further developments regarding Friday night's incident in Laurelhurst Park, where protesters say makeshift bombs were thrown at them, and a couple of the devices exploded. I wrote a little about it just after it happened, here. The protesters say that they have identified one of the people who did the deed, but that the police are slow-walking any investigation of the incident. I won't get into who they say it is, at least not at this point. If you're curious, it's not hard to find out.

Such an interesting situation. When you're hassling the police for the third month in a row, do you still expect them to protect you zealously, and go after anyone who attacks you? In this case, the alleged bombing occurred just after the police themselves had attacked the protesters. Are the cops then supposed to defend the protesters against other attackers? I guess so.

It's weird. But this is Portland; we pride ourselves on weird.