Protesters vs. neighbors in Gateway

Thursday night at The Portland Protests was a lot like the night before. Once again the action began as darkness fell over the East Precinct police building in the Gateway area. The sequence of events was the same: protesters doing their provocative stuff at an entrance to the building; police doing their testosterone-fueled "bull rush" and retreating; then another bull rush and retreat; rinse and repeat ad nauseam until after 2 in the morning.

Nothing of substance happened, as far as I could tell. There were, to paraphrase our Dear Leader, some very fine jackasses on both sides.

Did anything new go down? Here is all I could see as different between Wednesday and Thursday:

1.  There were more demonstrators.

2.  There were more police, including state police. But no tear gas.

3.  There were way more police vehicles on the scene: lots more cop cars, and a line of motorcycle officers, which I hadn't seen before in the two-months-plus of protests.

4.  The protesters' free-snack van had all four of its tires slashed, on camera, by a cop who someone said was Officer No. 12.

5.  The sound car with the police DJ From Hell in it apparently rolled over spikes that the protesters had thrown on the road, and they flattened at least one of his tires.

6.  The cops moved in earlier, around 10:00, before the protesters got beyond the graffiti-and-garbage-can-fire stage at the door. Nobody got another chance to try to smash through the glass entrance inside the plywood boards.

7.  Perhaps in keeping with Mayor F. Ted Wheeler's stern press conference earlier in the day, there were more arrests than are usual at these things.

But the saddest feature of last night's events, sadder than the night before, was watching the protesters get into it once more with neighbors of the precinct who don't share their views, or at least don't approve of their tactics.

The police precinct is not in a ritzy part of town, to put it mildly, and the people who live out there are not well-to-do. As the protesters started their inane spray paint graffiti and garbage can fire in front of the police precinct, two elderly women from the area tried to stand before the large, unruly crowd and reason with them. The first one got hit in the eye with a bunch of paint thrown from a can. She then got a heated lecture from a masked, helmeted protester guy who towered over her. 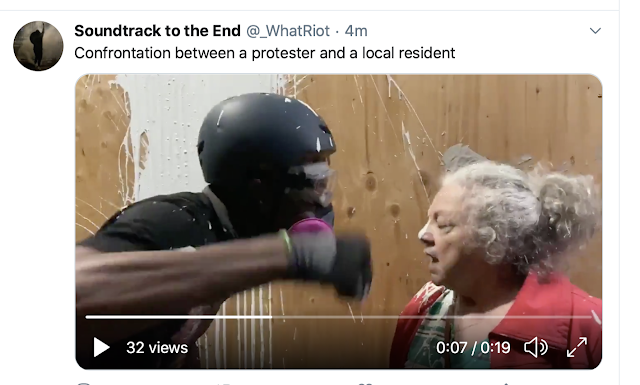 Then the other lady strolled up, leaning on her walker, and from somewhere she managed to produce a fire extinguisher! She got a little of the stuff blown into the flaming garbage can, but then a young protester, who had been trying to break through the plywood boards on the front of the building, blocked her. The older gal also got screamed at for a while by members of the "woke" crowd.

A short time later, the protesters were back at the front of a nearby trailer park, where they had gotten into a shouting match with a woman wearing a Nazi armband on Wednesday night. Since then, someone had spray painted "A Nazi lives here" on her trailer. The arguing resumed last night, and she finally brandished some sort of club. 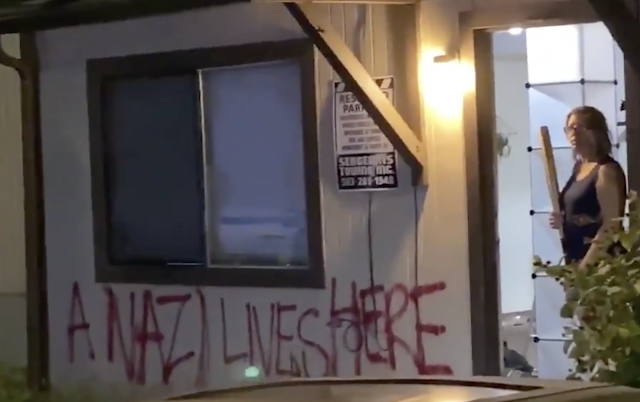 Meanwhile, four or five men who live in the park were out front, one holding a pipe in his hand, telling the protesters to go away. One resident explained that although he didn't agree with his neighbor's beliefs, he would defend her right to hold them.

I thought to myself, Here are these people just trying to live, and they're being screamed at by these young, self-righteous protesters who have brought to the neighborhood nothing but noise, tear gas, and disruption. The black-clad zealots know everything, and if you're not with them, you're against them. Okay, the Nazi thing is bad, but this is how you handle it?

Another nerve-wracking aspect of last night's festivities was the interaction with vehicular traffic. A lot of the action happened on Stark and Washington Streets, which in that part of town, near a shopping mall and a major freeway on-ramp, are decidedly not pedestrian-friendly. At times the protesters had those streets blocked, but it seemed like just a matter of time before a bad accident was going to happen.