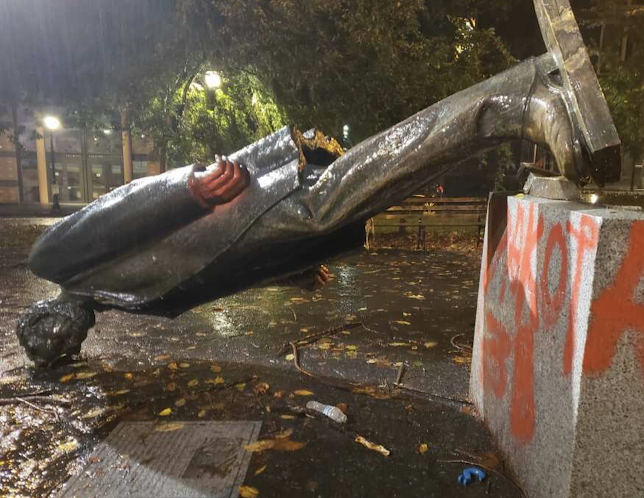 Just when you think the Portland police are going to win the title of City's Worst Jackasses, the Portland protesters make their move and zoom ahead in the competition. On Saturday night, it was the cops' turn to be the supreme asshats, but last night, the protesters outdid them, which is quite an achievement.

They declared it a "day of indigenous rage," which ended with a vandalism rampage around downtown. I don't know how many actual indigenous people were on hand – video wasn't allowed – but there were several dozen rioters of some ethnicity or other. The mob smashed windows at Wells Fargo, Starbucks, the Portland State University public safety office, and the Oregon Historical Society.

That last one was especially stupid. OHS does more than any other institution to shine a light on the history of the native peoples who once occupied what is now called Oregon. And to expose Oregon's racist past. But I guess they're not perfect enough for the children of our grievance culture, and so the whole glass entrance to the museum was trashed. The damage was quite extensive. 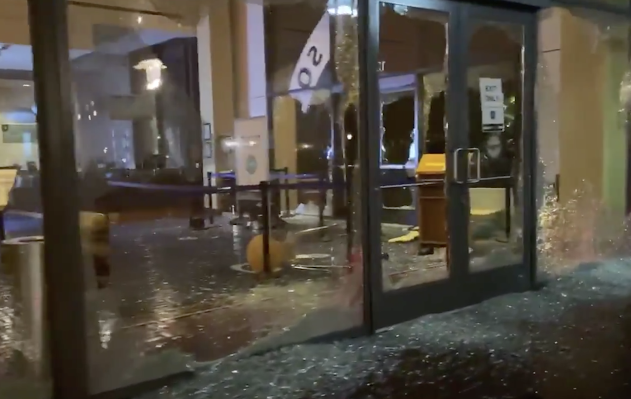 I wonder how many of the "raging" protesters have ever set foot in the place.

Then it was time to pull down some statues. Teddy Roosevelt was spray painted and toppled, and then they moved down the Park Blocks and did the same to Abraham Lincoln.

For heaven's sake – Lincoln's out now, too? I was pretty taken aback when Washington went down, back in June, but if Lincoln can't be celebrated, I give up. Another person who wasn't perfect enough for the aggrieved. A "colonizer," he was. "Stolen land," man, you know?

Yeah, we know. So what do we do now, besides be outraged and break stuff? Overthrow the government, I guess. Sheesh.

I don't know where the police were during all the destruction. The other night, when their precinct was the apparent target, they were all over the demonstrators, making more than two dozen arrests before any property damage was done. By the time they showed up last night, there was broken glass, graffiti, and damaged sculpture all over the place. I think some people were arrested, but because the protesters didn't allow video to be shot, that information will have to await an official police statement.

Earlier in the day yesterday, a small group of right-wingers had returned downtown, some of them with assault weapons at the ready. Eventually they met up with some lefties, whom they maced, and a few objects were thrown from the roof of a parking garage. The police showed up pretty quickly and blocked the lefties so that the righties could get in their trucks and drive back to wherever.

When the lefties complained about the mace, the projectiles, and the assault weaponry, the cops told them to file a report. No arrests were made.

In sum, the day saw lots of bad behavior, but the indigenous rage rioters won the jackass ribbon, hands down.

UPDATE, that afternoon: It took all morning but the police got their official version up, here. Three people were arrested. The cops call attention to the fact that there was a guy with a gun shooting around a neighborhood in southeast at the same time. They're blaming their slow response to that incident on all the personnel they had dealing with the protests. Judging from all the damage the protesters did, you wonder what the cops downtown were doing.

The police report also shows other vandalized businesses besides those I mention in the main post. It was bad.