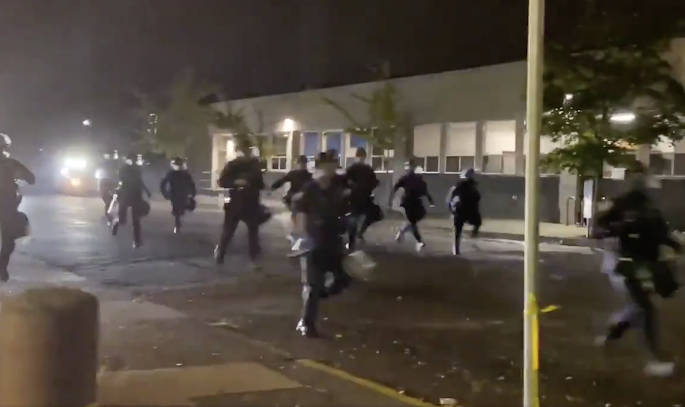 The Portland police broke up last night's protest before it got started. They arrested 26 people who were standing in the street near the North Precinct on MLK Boulevard. Whatever the demonstrators may have been planning to do, they didn't get to do it.

The early bull rush and arrests have become a familiar police tactic over the last couple of months. The cops have even gone so far as to hassle and arrest protesters as they gather at parks before marching. But these early busts are questionable. If in the middle of the day, a person of sound mind blocked traffic (which is the only offense anyone got to commit last night), they'd probably get a ticket. They would not be arrested.

The obvious distinction here is that the offenders were about to make a statement about police brutality, at a site where previous protests had led to vandalism and arson. Is that enough of a difference to justify pre-emptive arrests? Here's an excerpt from the official police version:

North Precinct... has been targeted numerous times over the past 130-plus nights by violent protests, including some that devolved into riots, arson fires, and violent attacks on officers. On numerous occasions, officers have attempted to deescalate by staying far back, and not intervening when streets were blocked by crowds. That strategy has not been successful in preventing violence from individuals in the crowd who are intent on forcing officers to respond.

The Portland Police Bureau (PPB) had information that the gathering was a planned "direct action" event. The crowd's posture, including their armored attire, strongly suggested that this was planned to be another such event. PPB was also concerned about the safety of the protesters, who were clad in black and difficult to see, on a major thoroughfare that was open to vehicular traffic. Due to these concerns, and the fact there were resources in place to make arrests, action was taken earlier in this event than ones before.

There were multiple warnings broadcast over loudspeaker and social media (Twitter)...

After a pause to allow people a chance to move to the sidewalk, Portland Police officers moved the crowd out of the street and made targeted arrests. The road was soon reopened.

I wonder if it wouldn't be wiser for police to play by the same rules every night. The element of surprise, if it's there at all, isn't stopping the 100 or so true hard-core "career" protesters. And arresting people for preparing to protest is just going to fire up fair-weather demonstrators who hear about it. I would not be surprised if a larger group shows up in the same place tonight.

As for the arrests themselves, they were brutal. Forbidden to use tear gas, the Portland cops are now pepper-spray happy. And they do love throwing people to the pavement. There's a certain glee when they relive their glorious moments on the gridiron.

Last week was pretty peaceful on the protest front, with the exception of Tuesday night's tear gas festival at the immigration jail in South Waterfront. There were demonstrations every day, including a few in north Portland and a lively one in inner southeast, but they seem to have gone off without incident. It seems like the police don't want that.