Last night's episode of Portlandia Protestia was pretty depressing. It was a contest between the dissidents and the cops to see who could come across as the bigger jerks.

It was close, but the protesters won.

They took their nightly crapshow back to the front door of the mayor's condo building in the Pearl District. They were there strictly to taunt him on his birthday. It was anything but good-natured. They spray painted their slogans on the front of his building. They broke a bunch of windows, and went inside a dentist's office on the ground floor. They threw flaming material into the building. 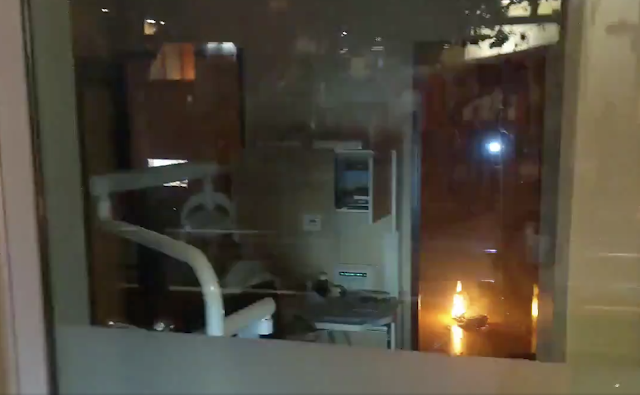 They shot off fireworks. They started a huge bonfire in the middle of Glisan Street. It was producing some nasty black smoke. Somebody said they threw a chair from the dentist's office onto the fire, which would make for some pretty toxic fumes. They definitely commandeered a picnic table from some poor business nearby and threw it on for good measure.

And what is the point again? Black lives matter? Defund the police? Give me a break. It was more like, we're bored and we hate our parents.

I don't know what took the cops so long to get there, but by the time they did, it was easy for them to make their perfunctory "riot" declaration. For one thing, there was a deliberately set fire going in the lobby of an occupied apartment building. And a huge conflagration in the middle of the street in a densely populated neighborhood. Not to mention another noisy dance party in progress at 11:00 on a Monday night.

The cops did their "bull rush," and they arrested quite a few people – 19 of them before the night was over. Which was completely justified, in my view. But the way some of the police went about it was disgusting. Once again, they chased down slower demonstrators, tackled them or threw them down hard to the pavement, and in a couple of cases, gratuitously punched them in the head when they were down.

And they did this knowing that the video cameras were rolling! You can only imagine what they do when they get people alone.

Anyway, they put the fires out, chased the rioters up Glisan all the way over the I-405 overpass, and took the arrestees away in a couple of modern-day paddy wagons.

And so the program unveiled on Sunday night was repeated: more arrests, more brutality. When their right-wing buddies aren't around, the cops really flex.

Thank goodness, the Trump types weren't around last night. But in their absence, many in the police ranks feel they have a license to whack people with abandon.

All that said, I still give the protesters the win in the asshattery department. Last night, they were too cute by half.

The official police version is up, here.