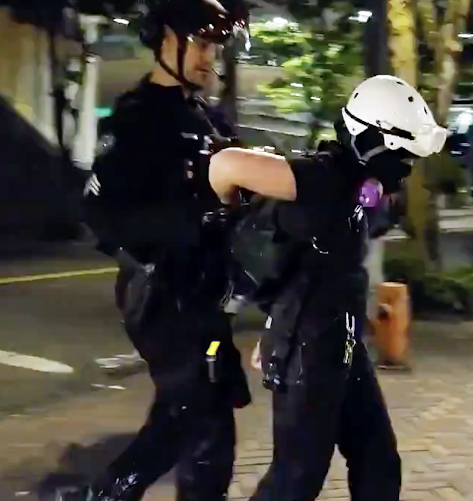 Another ugly night on the Portland protest scene. The kids in black, who looked to be in excess of 100 strong, decided to take the show downtown, starting at the north end of Waterfront Park and ending up down around the Justice Center.

The cops got involved early, and a standoff took place before the protesters even got out of Old Town. The police line and the protester line both blocked the MAX train tracks on First. As best I could tell, that happened a couple of different times.

At some point, the police say, protesters threw eggs and water bottles, and that was the cue to start the brutal Po-po "bull rush." Several people were tackled and arrested.

The group then marched to the Justice Center and City Hall, whereupon the police declared several streets closed and ordered the crowd to get out of the road and onto the sidewalks. Few complied, and more arrests were made – 11 in all for the night.

In the ongoing competition to see who could be the bigger jerks, it was close, but I'm giving the title on this night to the cops. They're throwing people down violently to the pavement for the crime of standing in the street in Antifa garb.

Not only that, the police are acting out in a grossly sadistic manner. They keep macing people in the face who are already on the ground, subdued, with a cop holding them down. Last night they had a protester pinned to the asphalt, when along comes this little fat officer with a can of mace. He grabs the arrestee by the pony tail, yanks the person's head off the ground, and sprays their face with pepper spray.

I'm as tired of the protests as the next person, but you know what? That's bullshit. And counter-productive. They're proving the demonstrators' point.

A little later, a person who got caught up in another "bull rush," and had been thrown to the ground, went into a gruesome seizure, which went on for quite a while. Eventually an ambulance came, and they took the person off on a stretcher.

The official police version of the night is here. The charges listed all seem likely to be thrown out, and even our law-and-order U.S. attorney probably won't bother with any of them.

So what was achieved? Nothing.

But though this night was a pointless rerun of dozens of nights before, there may be long-term consequences building over time. The mayor, Ted Wheeler, could be headed for a big upset in November. More on that in a separate post.