Portland protest litigation in the news 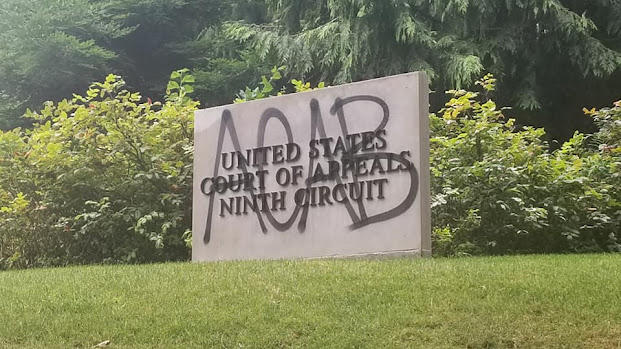 The Portland protest scene has generated a fair amount of work for lawyers. There were a couple of interesting courtroom developments related to the protests on Friday, and I was hoping to get to them over the weekend, but Sunday night's God-awful riot pushed them to the back burner.

First, the Ninth Circuit federal appeals court reinstated Judge William Simon's injunction, which I wrote about here and here, prohibiting at least some federal officers from using force, threats, or dispersal orders against journalists and legal observers who are working at the protests. The appeals court had previously stayed the injunction, but that stay has now been lifted.

Unfortunately for the journalists, the court order does not appear to cover Portland police officers. Maybe because they are now deputized as federal agents, it could cover them. But let's face it, out on the streets, the Portland cops have shown quite clearly that they could not care less about the niceties of any court order.

Interestingly, Diarmuid O'Scannlain, one of the three judges on the Ninth Circuit panel, dissented. Judge O'Scannlain, unlike the other two panel members, works here in Portland. His chambers are in the Pioneer Courthouse. He would have kept the injunction in place. "[T]he First Amendment-based right of public access and its corresponding framework have never been deemed to apply to riot control and crowd dispersal in a public street," he wrote, adding: "The injunction... allows the press, but not others, to disregard dispersal orders that are clearly lawful. That can only be understood as a special dispensation that is not consistent with the First Amendment."

Meanwhile, at the other federal courthouse, they had to declare a mistrial in a woman's lawsuit against a Portland police sergeant alleging excessive force at City Hall in October 2016. The cause of the mistrial was a hung jury. Maxine Bernstein at the O has the gory details in this story.

McDaniel blasted pepper spray in Drozd’s face while Drozd was standing on the steps outside City Hall after protesters had been pushed out of the building, according to the plaintiff and Drozd’s lawyers.

But the sergeant testified that he faked spraying the chemical and never used it against Drozd or a woman standing next to Drozd.

[P]olice had pressed a crowd of demonstrators out of City Hall through the Southwest Fifth Avenue doors after a contentious closed-door City Council vote on the police contract. Drozd ended up standing outside behind one of the open doors and tried to videotape through a glass pane as police struggled with a young Black man inside.

Drozd had also sued the county, because there were sheriff deputies involved. The county reportedly settled out of court for $40,000.

I must admit, I missed the 2016 incident. I was busy with other things. But protesting that awful police union contract is absolutely the right thing to do. It was then, and it still is now. The current contract runs until next June 30.