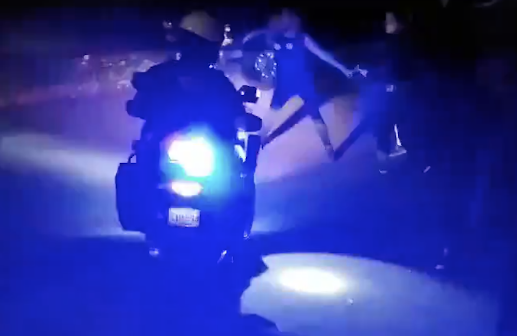 The ongoing slap fight known as The Portland Protests went back to Laurelhurst again last night. Again, the police showed up early, hassling the protesters as they assembled at Laurelhurst Park, but not as forcefully as on Monday night. It seemed like mostly the DJ From Hell with his baiting announcements.

The crowd then marched in the street to the East Precinct/sheriff's office at 47th and East Burnside, where they chanted and rapped and danced and stood in the street for a couple of hours.

At around midnight, as some protesters were driving away, a motorcycle cop pulled one of them over. Part of the crowd came over and began harassing the policeman, who was by himself, and during that heated exchange, the stopped car took off. When the cop got back on his motorcycle to pursue, a couple of the protesters decided to block his path. The policeman kept going, at startup speed, and hit two of the protesters, one after the other.

There is video of the incident on Twitter, here.

A motorcycle cop pulls over two vehicles that were blocking the street to protect the crowd. Protesters swarm him and both vehicles drive off. Two protesters block the motorcycle as it drives off, knocking them both to the ground. pic.twitter.com/eDM83XjZ4G

This made the crowd angry, and so back to the precinct they went, really revved up now. The police, who had been holding back all night, came out and did their usual show of force. 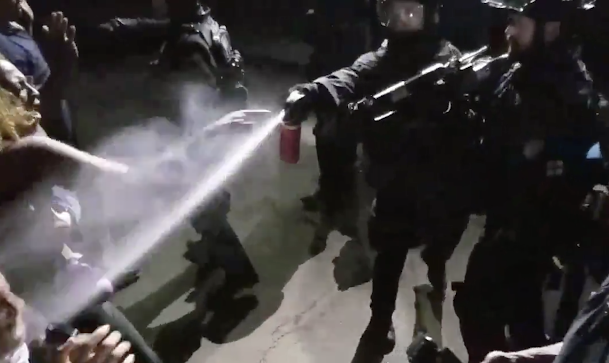 Four people were arrested, including one of the persons who had been hit by the motorcycle. According to the police, she refused medical attention from them. They took her to a hospital anyway.

Things broke up around 1:00 in the morning. The official police version is here. If you compare the police version with the video, it will give you an idea of how the official accounts are always deeply shaded and not entirely trustworthy.