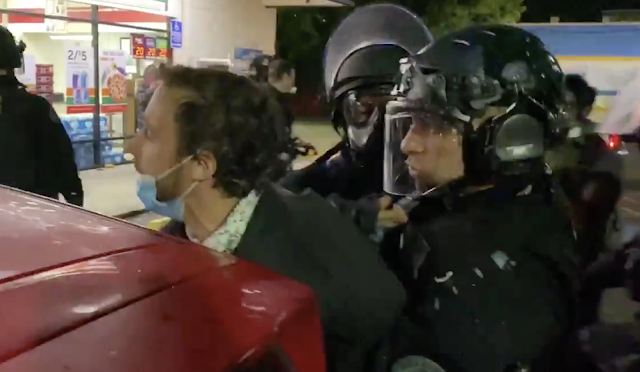 At last night's Portland protest, the behavior of the police was every bit as bad as it was on Saturday night, if not worse. And that's saying something.

In the continuing jackass competition between cops and protesters, the protesters never got any points on the board, because they were playing defense the entire night. Not only wouldn't the police let them get near the police union office – they wouldn't even let them assemble in a park ahead of time. In a chilling scene, dozens of city cops in riot gear descended on Kenton Park, where a mellow group of a few dozen lefties had been gathering. The police immediately began activity that honestly can only be labeled as harassment.

They arrested and maced one guy because he had a "Register to Vote" sign on a stick, and hey, the stick could be used as a weapon. They took some guy's energy drink because hey, there could be alcohol in there and this is a city park. They maced a woman who was handing out medical supplies. One protester had a pocket-sized can of mace on him – confiscated.

And the justification from the police bureau p.r. machine was particularly atrocious:

It's an "unpermitted march" – so what? What country are we living in again? And the whole fetish with the shields is kind of ridiculous. On Saturday, the "Proud Boy" militia groups, who held their unpermitted rally in Delta Park, had not only large plastic shields, but also electrified shields that will deliver a taser-like shock to anyone they touch. The cops did not seem to think any of that was a problem.

Besides, a shield is not a weapon; by definition, it is a defensive object. Given the many people who have been seriously injured by "less lethal" police ammunition in Portland in the last four months, it is not reasonable to tell people they can't bring one to a protest. And "safekeeping"? Come on, police, stop with the passive-aggressive crap and act like professionals for once.

I think there may be a Second Amendment angle here. Even if shields are weapons, as they are in the Orwellian mindset of the Portland police bureau, don't people have the right to bear arms?

The arrests in the park were not polite and civilized. When the police had people on the ground, they sprayed pepper spray in their faces. It seems like everyone who's arrested at these things gets maced, just for good measure. Officer No. 3 was probably the biggest problem child, he and his pepper spray can. Here he is giving a faceful to the "Register to Vote" guy as he wrenches the sign out of the guy's hands. Credit No. 64 with the assist: 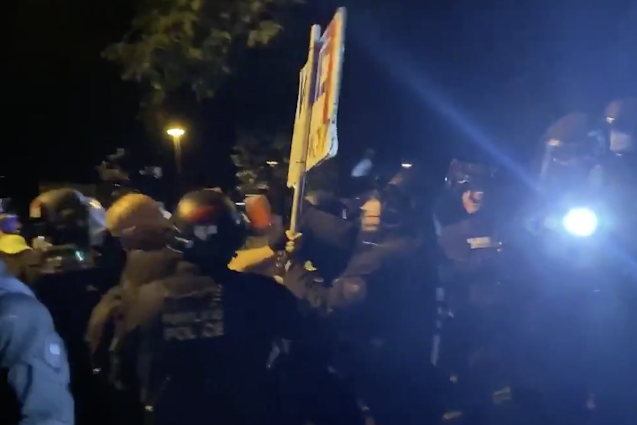 There was no good reason for the police to go to the park, or to behave like a JV football team when they got there. All summer long, a course of dealing has been established: The gatherings prior to the protests are left alone, because no one is breaking any laws – or at least, any laws that are ever enforced. Now the cops won't allow even that, because hey, somebody might march in the street instead of on the sidewalk.

What next? Do they go to the demonstrators' homes and arrest them on the front porches as they leave?

There are going to be lawsuits, lots of lawsuits, for all the stunts the PoPo have pulled in the last few months, especially Saturday and last night, and they are going to be mighty expensive for the taxpayers. Or as one wag on Twitter put it:

Once the police started in with the bullying, the atmosphere was poisoned. Yes, a few people threw objects at them. And the police take that as establishing that for the rest of the night, they can unleash their aggression on anyone they choose, without limit. Someone threw projectiles – that's always the lead-in to the official version. Some nights you wonder whether it actually happened. At one point last evening, two officers were seen picking up rocks from under bushes along Lombard Street. Query what that was all about.

I didn't see any officers or other barriers blocking that sidewalk, just the announcements. It seemed like a schoolyard dare, a baiting.

I also didn't see what, if anything, triggered the first police foray into the crowd, but they arrested several people right away. The crowd then went out into the street, because if they were going to be arrested, they might as well have some room to rap and chant. Soon thereafter the cops did several of their usual bull rushes, knocking people to the pavement and otherwise touching them up good as they hauled them off. One guy in a wheelchair was taken in, heckling the cops the whole way.

Several of the officers who were chasing and whacking the demonstrators had no identifying markings on their helmets. None of them wear name tags, because the public is no longer allowed to know their names, but at least they have been wearing large numbers on the backs of their helmets for identification if (or maybe I should say when) their conduct is questioned. On last night's video streams, I saw at least a half dozen police wearing helmets without the numbers.

In all, 24 people were arrested. The official police account is here. If you look at the charges, none of them seem like the type that the county district attorney will pursue. But then there's the shadow prosecutor, U.S. Attorney Billy Bob Williams, and he might press some of them.

Once again, the police instigated the melee, and supplied most of the violence. This is not going to restore peace in Portland. It is going to have the opposite effect.

When your response to protests against police brutality is to brutalize the protesters, you are not thinking clearly. The cops see this as a battle, and they really do think they are going to win. But this is Portland in the 21st Century, and they are mistaken. Their lives are going to be different a few years from now, whether they like it or not. I guess they will take out their frustrations by abusing people.

Meanwhile, the political fallout from this may be spreading. Now that Governor Kate Brown has repeatedly injected herself into the Portland police protests, some of the bad will generated here is likely to rub off on her. I didn't see state troopers out there last night, but the governor has now entered the fray, and she bears at least partial responsibility for what is going on.

Then there is Portland's mayor, who has lost all control over anything having to do with the protests. He needs a new police chief, a new job, or both.

I don't know how bad the protesters might have behaved if they had had a chance to go on offense, but last night's jackassitude was pretty much all the cops' doing. And so that's two booby prizes in a row for them.