Why did Schmidt let the laser people go? 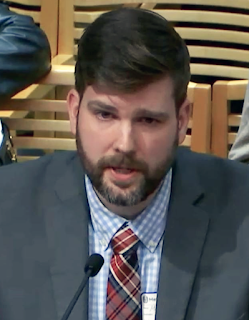 Yesterday I wrote that the U.S. attorney for Oregon, Bill Williams, is way off base in using the federal law against "civil disorder" to prosecute cases against protesters who didn't commit any offense against federal personnel and federal property. Like many others, I think that having a roving federal police apparatus enforcing local laws is unnecessary, ridiculous, and dangerous.

Williams has been a willing, if not eager, participant in the gaslighting antics of Trump and Barr in Portland, and for that, as I said, he needs to be shown the door at the next opportunity. Wyden, Merkley, please make a note of it.

But by the same token, the rookie county district attorney, Mike Schmidt, needs to do his job. Yes, he was just elected on a progressive platform, and yes, he has announced that he isn't going to prosecute protesters unless they attack people or damage property. But several of the defendants whom Schmidt has let walk, and who are now being prosecuted by Williams, are accused of serious misconduct that seems to fit Schmidt's criteria for prosecution.

For example, two of the federal defendants are accused of shining green lasers at the eyes of police officers. One incident occurred at the police union headquarters on August 8. The other occurred at the federal courthouse on June 14, but the suspect was arrested at the mayor's condo building later that night and initially charged by the Portland police with pointing a laser there.

Another federal defendant is charged with throwing her helmet at a Portland cop at North Precinct on August 24, and another guy with pounding his way into the East Precinct building on August 5. Why were the county charges dropped against these people?

Williams, who was a honcho in the county d.a.'s office back in the day, is running his own shadow d.a.'s office over in the federal building. Wrong as that is, it's also wrong for Schmidt to be letting the "bad" protesters go when they are charged with crimes like laser-pointing and breaking and entering.

The real test for Schmidt will be when the Portland cops murder someone. It's just a matter of time. He'll be expected to live up to his campaign promises. But in the meantime, can we get a little balance, and end this crazy backbiting among different levels of law enforcement around here?