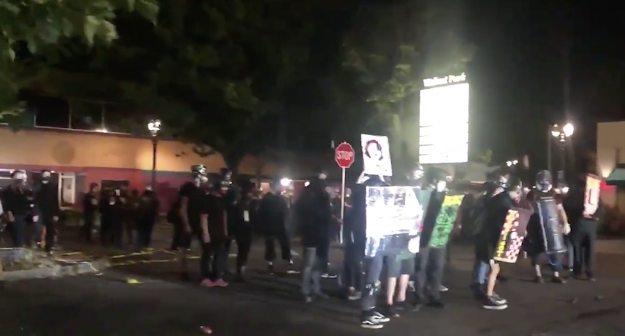 Last night's Portland protest was a mere shadow of nights past. A crowd formed at Woodstock Park in the southeast part of town, but there was a long argument about where they should go marching, and no consensus was reached. Several prominent politicians live in the area, but they and their neighbors were spared.

Some of the would-be protesters went home, but others went to North Precinct on MLK Boulevard in the northeast part of town. There they met up with some other folks who had reportedly marched over from Alberta Park, but it looked as if the combined groups were only about 100 people. And apparently they thinned down to half that within an hour or so.

Anyway, they blocked the street for hours and threw a few things at some cops, and around 2 a.m. the cops arrested three people. The official version is here.

For the second day in a row, the more significant protest-related news of the day happened off the streets. Three members of the toothless citizen advisory board that gets involved around the fringes of police discipline resigned. Adam Green, Hillary Houck, and Carol Johnson all packed it in on the same day. That's three out of 11 seats on the advisory board.

Green was the most vocal of the three.

"We continue to witness excessive force used by officers on the streets. Members of the media continue to be threatened. Armed Trump supporters are allowed to parade through downtown Portland while pointing guns at people that aren't wearing Trump gear."

"These are just a few examples of a failed system with failed leadership. I can no longer support this system in any way," Green, who was appointed as a recorder at the Citizen Review Committee in April of this year, said.

There's a new police disciplinary procedure on the ballot in November, but as everybody with a brain knows, the real problem is the police union contract, which the City Council had no problem renewing for another year in late June. And so, yeah, if you're part of the current system, you're part of the problem.

That's the thing about citizen advisory boards. They're window dressing for the people with power. If you're on one of those boards and the people with power don't do their jobs well, it makes you look bad. Rather than playing along and looking like the villain, sometimes you have to quit. 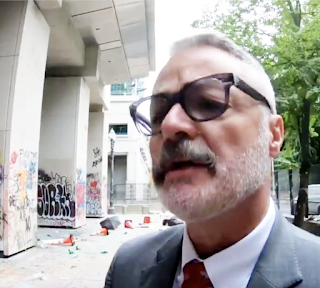 But perhaps the most depressing news of the day came from the office of Oregon's law-and-order U.S. attorney, Billy Williams. As noted here yesterday, the state troopers who are in Portland to quell protests have been deputized by federal law enforcement, and if they arrest you, they can turn you in to the U.S. attorney for prosecution under federal law.

This comes in handy when the county D.A. refuses to prosecute people for vague offenses like "disorderly conduct."

I wondered aloud yesterday what federal laws are being broken at Portland protests when they are not near federal property. Well, lo and behold, there's a federal crime of "civil disorder." It's rarely prosecuted, but when you work for Donald Trump and William Barr, sometimes you have to do rare things to keep your job.

Maximum Maxine over at the O has a great explanation:

Two men and a woman appeared before a federal judge Wednesday in Portland, becoming the first in Oregon to face the rare federal charge of civil disorder for alleged violence during this summer’s turbulent protests....

Civil disorder is defined under federal law as a “public disturbance involving acts of violence” by three or more people “which causes an immediate danger of or results in” injury to people or their property.

To prove the crime has occurred, prosecutors must show someone committed or tried to “obstruct, impede or interfere with” any law enforcement officer or firefighter engaged in the lawful performance of their official duties during a civil disorder.

Further, prosecutors must prove that the civil disorder “obstructs, delays, or adversely affects commerce or the movement of any article or commodity in commerce or the conduct or performance of any federally protected function.”

And so if you "interfere with" any type of police officer at a protest that "causes" a "danger" to "property" and "affects commerce," you've committed a federal crime. And if any of the flavors of cop on the scene pick you out for arrest, Billy Williams may decide to prosecute you.

Now, he's not the only U.S. attorney pulling this. It's happening in other cities, too. But this is Oregon. I don't know where all of the trouble is going to end up, but if Biden wins, that guy's gotta go. As in, the day after the inauguration. And not to a federal judgeship, either.