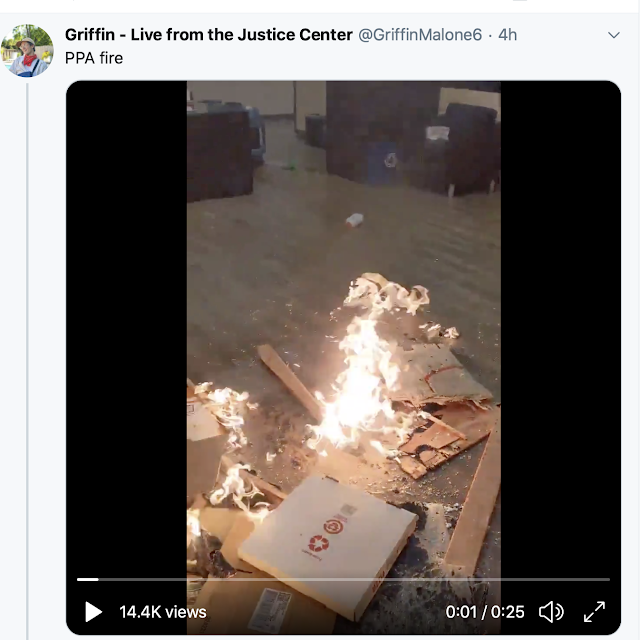 The Portland Protests get crazier by the night. Now they're featuring arson, brazenly streaming on Twitter.

The scene last night was the police union office on North Lombard. As usual, the place was boarded up in anticipation of the protest. A couple of hundred demonstrators once again marched over from Peninsula Park and took over the street in front of the building. They blocked off the road with vehicles, and with chain-link fencing that they took from God-knows-where. Immediately after the protesters arrived, they tipped over dumpsters from nearby businesses and burned their contents in the middle of the street. As on many previous nights, outdoor tables and benches from restaurants in the vicinity were also commandeered by protesters, and used as barricades. Some of the barricades were set on fire.

Interestingly, the Timbers Army van was part of the blockade. 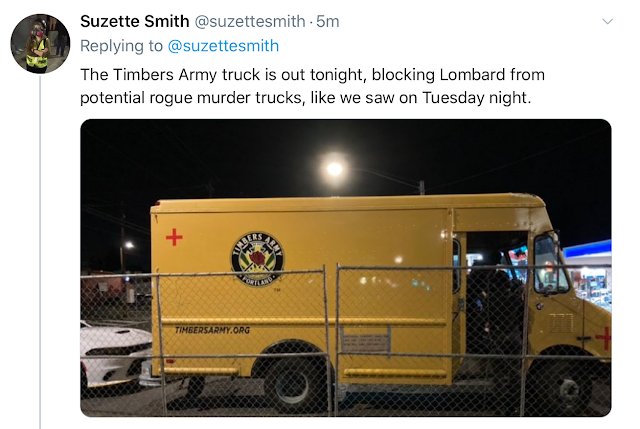 That should be fun when the kids march on Dunthorpe and and liberate Merritt Paulson's house for The People.

But back to the main story: There was the usual chanting and graffiti-ing of the building to start, but as midnight approached, some of the protesters started pounding hard on the wood that was protecting the union office. After a while, they broke a big hole in the boards.

That is when one or more members of the crowd set garbage on fire and pushed it through the hole in the plywood. Not just a little garbage, a lot of garbage. And then one member of the crowd fed the flames with a few two-by-fours. The fire was burning just inside the boarded-up door. It was not a small fire in a wastebasket. It was an open fire on the floor. The person with the two-by-fours was making a video recording of his or her handiwork. 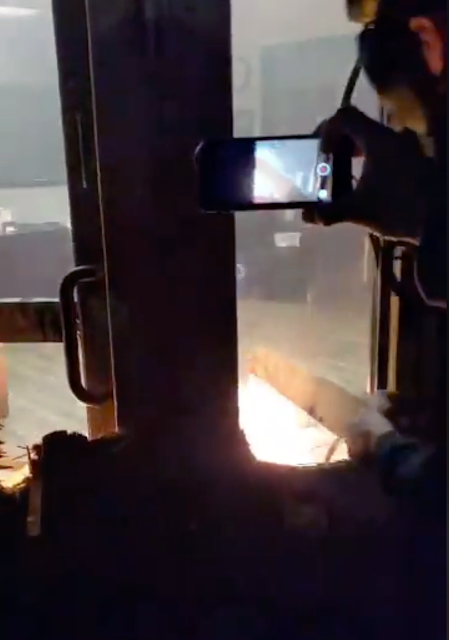 Then the cops did their "bull rush" thing, chasing the protesters through the neighborhoods. The state troopers joined the Portland police. All the usual street drama took place along the way. Apparently there were not one, but two, DJs From Hell making their apocalyptic, and loud, announcements. The racket went on well past 2 a.m. The action apparently extended north almost to Columbia Boulevard, which is quite some distance away.

Somebody must have put out the fire, but the Twitter crowd didn't show that. They were too busy running from the police the rest of the night.

I couldn't focus on much after I saw, with my own eyes, almost in real time, the fire burning inside the union office door. For the two-months-plus that the protests have been going on, the police have been pointing to fires set by the protesters, even calling them attempted murder, which seems like quite an exaggeration. Meanwhile, the protest sympathizers on Twitter downplay the fires, saying they're small, and after all, the building didn't burn down. But the video footage last night brought home for me the stark reality that these guys are not shy about committing first-degree arson, which is among the most serious felonies you can commit.

And for what? Does this help the Black Lives Matter movement? Of course not. Would anyone in their right mind think it did? Any good that last night's activities might have done (and hassling the police union is generally a good thing) was completely cancelled, and then some.

The arsonists must be (a) incompetent BLM activists, (b) people with a different agenda of their own who don't care much about BLM, or (c) intentionally working against BLM.

The incompetence theory doesn't work for me. This is either another agenda, or enemies of BLM.

What other agenda might it be? Anarchy is a good possibility. Portland has for many decades had a sizable anarchist crowd. The ubiquitous graffiti with an A in a circle? That's them. The fire seems like something they might do. Not everyone marching through the streets chanting "burn down every precinct," "abolish all prisons," and the like is an anarchist at heart, but the most aggressive of the demonstrators probably include hard-core anarchists.

The other possibility is that the arson is sabotage. Maybe the pyro perpetrators are police plants, or white supremacists, or other types who want to see BLM go away. Who knows?

I came away with other questions, too: After more than two months, why are the police (and the district attorney and the judges) not trying something different to try to curb the vandalism and arson? Why do the cops do the same thing every night, and expect a different outcome from that of the night before? They'll probably say it's because the politicians are restricting them, but the mayor said otherwise earlier in the week, and after all, the governor herself sent the state troopers in.

Maybe the police just want us residents to get tired of this, and let them finally crack some skulls. I don't know about the skull-cracking thing, but I do know the nightly crapshow has become tiresome. A couple of hundred people in orderly, noisy picket lines in front of these facilities every day, during daylight hours, would be great. But this stuff? Nah.