The cops were worse than the Proud Boys 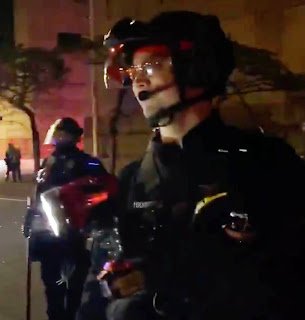 Thank you, Lord. Portland got through its latest Saturday of dueling protests without any battling protesters. With only a couple of exceptions, the right-wingers and the left-wingers didn't interact.

The night show downtown, however, was a different story. As best I could see, it was all lefties, but the police were particularly brutal.

Beginning with the event that had us all on edge: The noontime "Proud Boys" rally at Delta Park, which was billed as drawing thousands from around the country, actually attracted only a couple of hundred. One couple said they were from Florida, but most of the attendees seemed to come from just over the river in Clark County, Washington. Quite a few were showing guns, and in the backs of their monster pickups were more weapons. They gave speeches and chanted for a few hours, then left.

They did chase several people who looked like they didn't share the group's sympathies. One guy who identified himself as "press" was denounced as "antifa," punched in the face, and kicked while he was on the ground.

There was a heavy police presence at the park, and they did arrest three of the "patriots" on their way out, on weapons charges. 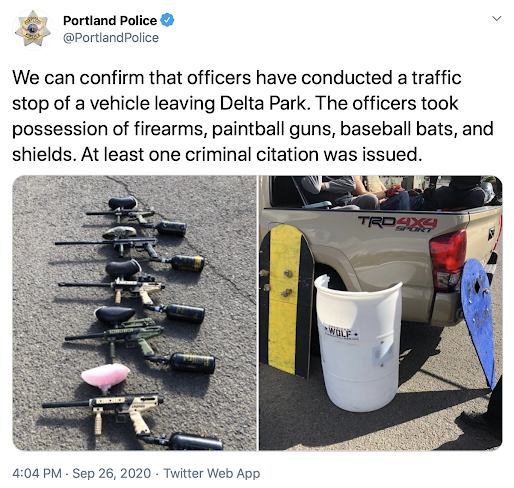 While the righties were doing their thing, a group of about 200 Black Lives Matter activists gathered, on the other side of the freeway, at the historic marker for the old Vanport neighborhood. There they put on speeches and such. The police stood between them and the militia types, and apparently the two crowds didn't mix it up at all.

Three miles away, the biggest crowd of the day, probably about 1,000 people, gathered at Peninsula Park. These included the hard-core dissidents who have been demonstrating almost every night since the George Floyd murder. The police and a few of the protesters got into an argument about the homemade shields that were being handed out. The police said they were weapons. Three people were reportedly arrested, but by and large, the event was peaceful.

The protesters had a point. There were plenty of shields handed out with impunity at Delta Park. Aside from the dudes who were arrested with all the illegal guns, none of the people who possessed or distributed those items were hassled about them.

There was also a BLM gathering at Irving Park, in close-in northeast. It looked like about 200 people. I think it was fairly uneventful, but the other three events had the media stretched so thin that something might have been missed.

It seemed that all four gatherings petered out by late afternoon. There was a rain shower in the timeline, which probably put a damper on some of the action.

There was a nighttime throwdown in the usual place near the Justice Center, and it did not end quietly. Several hundred people were there, speechifying and chanting, by 9 o'clock. One of the faces in the crowd was the actor Jim Belushi, who left before things got nasty.

So...I'm downtown at the protests. I just walked by Jim Belushi and was caught off guard. I asked him to remove his mask for a second to get a picture for proof. He asked me specifically "where the Trump boys were?" pic.twitter.com/BGokm38Sv2

There were lots of police in the Justice Center, ready to pounce. And it took little or no provocation to bring them stomping out. Yes, people were standing the street, and I believe a "blue lives matter" flag mght have been burned. But it was nothing to compare with what demonstrators did all summer.

When the police hit the street, they had two items on the agenda: (1) arrest people left and right for any offense, and (2) do it violently. They tackled people. They threw them to the ground. They pushed them down from behind. They billy clubbed them in the face.

The "bull rushes" began. Police pushing and shoving people, who were mostly in the park and on the sidewalks. The police herded the crowd literally in a circle, around the block, at one point. If you didn't move fast enough, for whatever reason, you were pushed, sometimes hard enough to knock you down.

Several of the cops seem to enjoy the chance to push small women around. It's a sad statement. 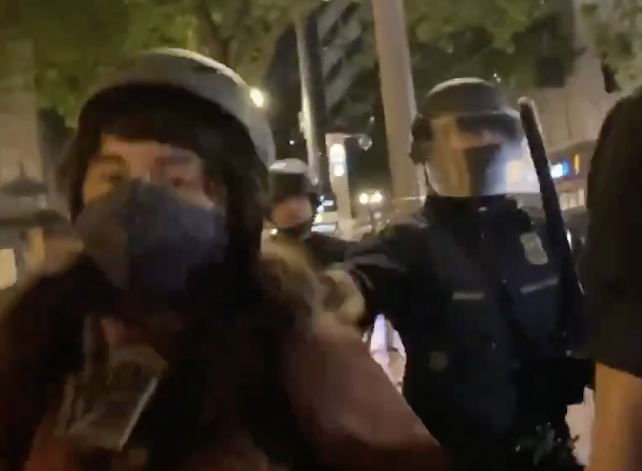 Not only were you not allowed to stand in the street, but you were also tackled if you tried to cross the street, at the crosswalk, with the light. When a guy on a bicycle made the mistake of trying to get through the area of the melee, a policeman brutally tackled him from behind, knocking him head first off his bike onto the street. The victim didn't even appear to be part of the protest group. Somebody said he was an Uber Eats delivery guy. But arrested he was.

It went on well past midnight. There was no tear gas, but a lot of demonstrators were injured.

After the events of the afternoon, the governor and the mayor were dislocating their shoulders patting themselves on the back. Suddenly the "Unified Command" was giving out the press releases – state troopers, county sheriff, and Portland city police.

But the midnight antics of the "Command" really wiped out a lot of goodwill before the successes of the day had a chance to sink in. The cops sort of proved the protesters' point about tone-deafness and brutality.

That's my judgment anyway, based on what I saw on the Twitter feeds of Sergio Olmos, Soundtrack to the End, Cory Elia, and others.

When you have an unruly crowd, I would think the goal should be to try to keep things calm. That was definitely not the cops' goal last night. I don't know if the downtown event would have petered out quietly on its own, but any fool could see that what the police did angered the demonstrators and ensured hours of havoc. Many of the cops were smirking as they maced and baited protesters. Professional and mature law enforcement, they weren't. This officer was particularly bad, and it was not his first time. 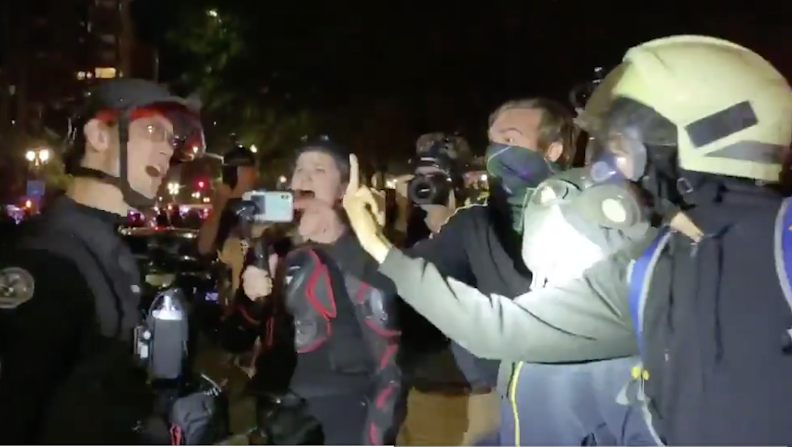 Anyway, expect more nights of protest in the weeks ahead. It must be what the cops want.

The official account from the "Command" is here. I suspect the arrest list for Saturday, which will likely be long, is a few hours from being finalized.

UPDATE, later that morning: Alissa Azar also tweeted a lot of good footage all day and night. Her account is here.