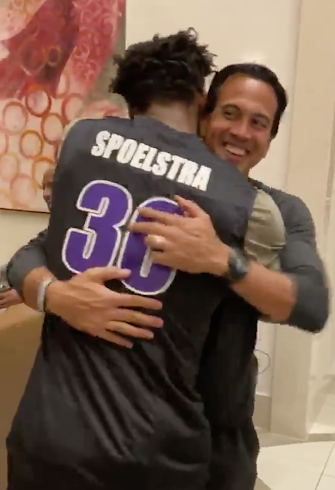 I mentioned a while back how many ex-Trail Blazers were still on the court in the NBA playoffs, even after the Blazers bowed out. One of them is still going. Meyers Leonard, who as I recall once scored 30 points in a playoff game for Portland, is on the playoff roster for the Miami Heat, although he hasn't been playing hardly at all in the post-season.

The Heat's opponent in the league finals are the dreaded L.A. Lakers, who easily took out the Blazers. I suspect Leonard might get in the games against the Lakers, because the L.A. squad is huge. The other Heat big men may find themselves in foul trouble, in which case old Meyers could find himself playing.

With an even tighter connection to Portland, however, is the Heat coach, Erik Spoelstra, who grew up here because his dad was a honcho with the Blazers. My friend Dwight Jaynes explores Coach Spo's Rose City pedigree today, here.