Who needs college sports? The Portland Protest types had a day-night doubleheader yesterday, with action downtown early in the afternoon and in Laurelhurst late at night. The daytime session was a dangerous melee with out-of-town right wingers; the nighttime session was the now-routine (but also dangerous) crapshow at the police precinct at 47th and East Burnside.

The downtown scene was the more interesting of the two. A crowd of right-wing "patriots" – it looked like about 100 people – held a noontime rally at the Justice Center. They carried American flags, "blue line" flags, signs with conservative slogans, signs with deranged Q markings, clubs, shields, pepper spray cans, and quite prominently in some cases, guns. They had hardly gotten 10 minutes into it when the left-wing zealots who have become a fixture in Portland marched into the park across Third Avenue and challenged them. There might have been a couple of hundred of the lefties assembled. They, too, had all their gear on.

Immediately the two groups started fighting with each other in the middle of Third. Punches were thrown, people beat each other and threw each other to the ground, objects were hurled, and copious amounts of pepper spray were shot in both directions. The groups threw fireworks and smoke bombs at each other. Some of the right wingers were flailing away at people with their clubs. Other "patriots" brandished their guns, and one fellow had out his revolver, with his finger on the trigger, aimed at the left-wingers. Several people were injured. 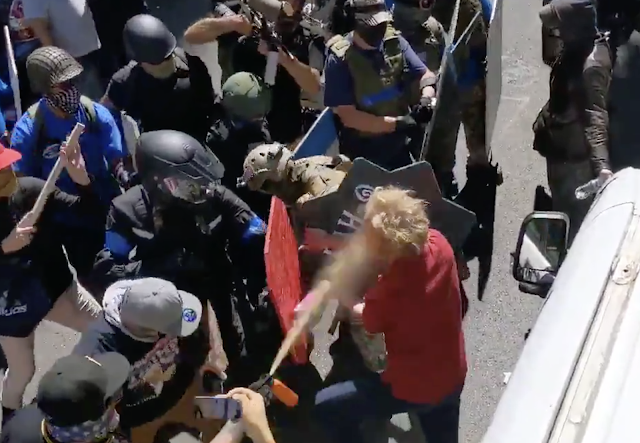 Things would settle down for a minute or two, but then the fighting would resume for several more minutes. This pattern went on for a long time. The flareups, and there were dozens of them, erupted constantly over what seemed like a couple of hours.

Another cut the right wing group charging into a crowd and beating people with sticks. They also throw an explosive device. #portland #ProudBoys pic.twitter.com/TqohryCspr

The police DJ From Hell showed up and made a few announcements: Get out of the street and onto the sidewalks. Stop fighting. Respect each other's First Amendment rights. But he was the only cop in sight. The Portland police, and the feds camped out in the nearby federal building, just let the combatants rumble on. 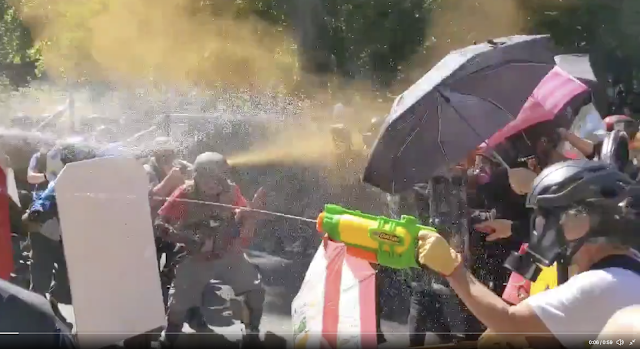 After a couple of hours of this, the right-wingers, who were outnumbered, started finding their way back to their pickup trucks and heading home. The lefties, who have been at it in the streets with the police every day for nearly three months now, were in much better playing condition than the righties. The Antifa types declared victory as their nemeses pulled away.

It was only after the "patriots" were gone that suddenly the police took an interest in "quelling" the "unlawful assembly." For no apparent reason, several dozen federal riot police (probably from the Federal Protective Service) marched out of the federal building and lined up around Terry Schrunk Plaza. There never did seem to be any threat to any federal property, but out they came anyway. They drove all the demonstrators out of the square, pushing, shoving, and firing "less lethal" ammunition here and there.

After standing around for a while, the federales retreated back into the building, with the crowd taunting them the entire way.

The lefties were outraged that the cops hadn't shown up to push back on the right-wingers. Certainly the lengthy brawl in the middle of the street met the definition of a "riot," which is usually the Portland police's cue to start their brutal "bull rushing" of an unruly crowd. But the po-po sat and watched instead. At one point, a Tweeter caught a uniformed officer having a private conversation off to the side of the violence with a member of the right-wing group.

The demonstrators on the left have long accused the Portland cops of being in cahoots with the white supremacists. From a distance, it's always been hard to accept that accusation, but yesterday's non-performance by the police did nothing to disprove it, that's for sure.

Indeed, the scent of pepper spray was still in the air when the police, suprisingly, issued a press release answering back to the charges of favoritism. Here's what they said – I'll leave it to you to be convinced or not:

There have been questions about why the events downtown were not declared a riot and why police did not intervene. Incident commanders have to weigh out the entire situation to determine if police action is likely to make things safer or not. In this case there were hundreds of individuals and many weapons within the groups and an extremely limited amount of police resources actually available to address such a crowd. Additionally, PPB members have been the focus of over 80 days of violent actions directed at the police, which is a major consideration for determining if police resources are necessary to interject between two groups with individuals who appear to be willingly engaging in physical confrontations for short durations.

While the activity in the group met the definition of a riot, PPB did not declare one because there were not adequate police resources available to address such a declaration. PPB had roughly 30 officers available for crowd management and there were several hundred individuals associated with the events downtown.

Do you hear that, kids? If you keep us up all night, we're not going to lift a finger to fight your battles for you. Not the most professional message I've ever read.

In contrast, there were plenty of officers available for the nighttime scene at the sheriff's office in Laurelhurst. That one was a rerun of many nights before, the details of which have been described in other posts on this blog. Last night, the protesters really got off on their whole fire thing. Burned a mattress, some American flags. Fourteen people were arrested on the usual charges; I'll bet only one or two are actually prosecuted for anything.

To me, the only interesting aspect of the night show was that the police once again tried to head the protesters off at the pass. The demonstrator group had assembled at Normandale Park, and their march to the precinct was blocked as they tried to cross over the Banfield Freeway at 47th Avenue. The riot cops had the overpass closed off. And so the marchers turned around, went back to their cars, and drove to the police station for the nightly fireworks, instead of walking.

A final note, from a legal perspective: During yesterday's day game, the DJ From Hell informed the crowd that the federal authorities had declared the protest to be an "unlawful assembly." Last week, U.S. District Court Judge Michael Simon issued an opinion that clearly stated that the federal officers have no authority to do that.

It's hard to see what purpose is served by the police spouting out dubious legal opinions from a sound car during a riot. But the cops in Portland do it constantly.