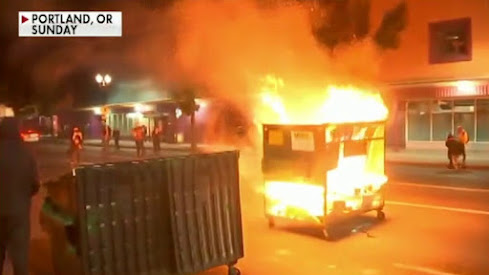 A common question heard during the Portland protests has been, "Why don't they arrest the firebugs?"

And when they do arrest arsonists at the protests, why doesn't law enforcement prosecute them?

Well, sometimes it does. Yesterday one of the culprits, from the earliest riot at the Justice Center in late May, pleaded guilty to arson.

The strange thing is, it was in federal court.

Now, as regular readers here know, I find it deeply troubling that Multnomah County now has two district attorneys: the real one, and then the shadow prosecutor in the form of the U.S. attorney, Billy Bob Williams. Williams is prosecuting people for protest-related crimes with no credible federal interests involved.

But I find it equally disturbing that the county d.a., Mike ".316" Schmidt, is letting people accused of serious crimes, like arsonists, walk.

Now, Schmidt wasn't in office yet when this particular crime went down. He didn't take over until the prior district attorney, Rod Underhill, walked off in a huff on July 31. But regardless of who was in charge at the county at that moment, why was it left to the feds to prosecute crimes like arson? Curious, and worrisome.