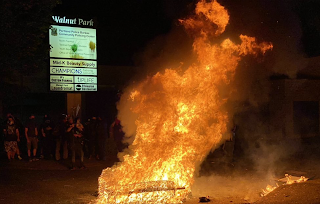 I don't have a lot to report on last night's episode of the Portland Protests. But what I do have to report contains one juicy tidbit: Among 15 people arrested on the street outside North Precinct, two were charged with reckless burning, after a couple of mattresses and some yard debris were set on fire in the middle of MLK Boulevard.

To me, the fires always seem like the most dangerous aspect of the protests. On Saturday night, one demonstrator's feet caught fire, and he wound up in the emergency room. Some of the blazes have been set inside buildings, even occupied buildings. That's over the line – at least, my line. And so arrests of the pyro types seem entirely appropriate.

There wasn't much Twitter coverage last night, but the intrepid Sergio Olmos and Justin Yau were there, and they provided good accounts and photos.

Portland fire is coming in to extinguish the fire pic.twitter.com/9fAc2exKqh

Firefighters are now on scene extinguishing the flames as officer secure the perimeter. The crowd is chanting disparagements at the police.#PortlandProtests #pdxprotest #BlackLivesMatter pic.twitter.com/lX8Ave6oEl

There were about 100 protesters, a much smaller crowd than the night before. When the first mattress went up, the cops let it go, but when the second one ignited, they called the fire department.

I didn't see the arrests. According to the police version of events (which is here, by the way), some of the crowd went where they were specifically told not to go, around behind the building.

The two members of the crowd who were charged with reckless burning, which is a misdemeanor, are listed in booking records as Adam Layee and Camillo Masagli.  Layee also picked up a felony charge of possessing a destructive device. It's not clear what that was about, but the police said they confiscated some incendiary material during the evening.

Things wrapped by 1:00 in the morning, and apparently no tear gas was used.

A final note for this dispatch: One of the protesters arrested Friday night at the police union office is reportedly the son of actor John Malcovich. We sure are one happenin' town.