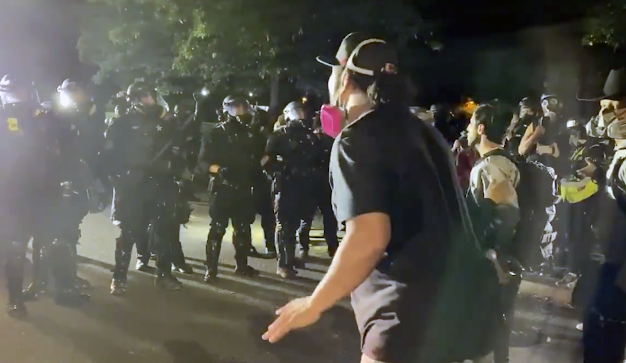 It was another episode of Portlandia Protestia on Saturday. Once again, I'm running out of steam in trying to keep up with it, but here's what I saw on the internet.

There were several peaceful gatherings around town during the day on Saturday to rally for racial justice. But when night fell, trouble arrived. The protesters and the cops were both at their worst.

The familiar scene for the crapshow was the Gateway neighborhood in southeast Portland, where it seemed like at least a couple of hundred people gathered in Ventura Park. After some speechifying, most of the group started marching toward the police East Precinct nearby, but they were stopped along the way by a line of police in riot gear. On Twitter, it looked to me like state troopers.

The Portland police DJ From Hell showed up and loudly told the marchers they had to go back to the park. Whereupon there was a standoff, and some objects were thrown at the police. Among those items were two or three Molotov cocktails, one of which set a protester on fire.

He was taken to the hospital.

Then the cops responded with tear gas, "less lethal" gunshots, and their loud flashbang grenades. They did a couple of rounds of their brutal "bull rush," with Portland cops joining the state police. They ran faster and harder than ever before, and they tackled protesters with greater gusto than I've seen in the months I've been following this.

The tear gas wafted into nearby homes, which upset the neighbors. "My babies are trying to sleep," one woman wailed, "and they don't have gas masks."

For their part, the protesters performed a lot of their usual stunts, lighting dumpster fires and burning warehouse pallets in the middle of the street. The police said that some members of the crowd also were throwing rocks, which the protesters always deny but I suspect is true. It only takes one person.

It doesn't appear that the demonstrators ever made it to East Precinct.

At various points, the cat-and-mouse game took the melee from Stark up to the MAX tracks on Burnside, and from Gateway out to 122nd Avenue. The police say they arrested more than 50 people, which I believe would be a single-night record for this interminable protest season.

I'm afraid we're going to have a couple more months of this. The police are going to arrest a hundred people a week, and they are not going to be gentle about it. The protesters may not make a showing every weeknight, but they'll definitely be out in numbers on and around the weekends. Let's hope we can make it through to the rainy weather with the death toll remaining at 2.