This is what Portland Police and Oregon State police are doing to nonviolent protesters. pic.twitter.com/glmAnBt6iM

The young woman who was arrested and carted off in an ambulance from last night's Portland protest bolted from the ambulance and ran away, according to the police. The official (and in several respects, misleading) version of last night's events is here. It shows that 27 people were arrested, not counting the escapee.

It appears that this afternoon's action is going down in Moscow Mitch country. Lots of Portland-esque streams are coming in from Louisville, Kentucky. If internet video rabbit holes don't scare you, you can watch live here. 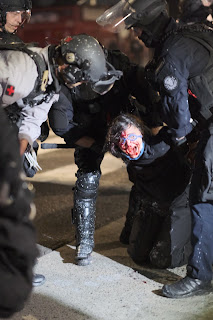