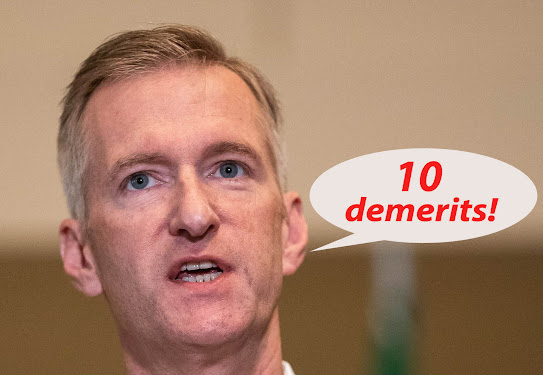 Last week I wrote about Portland Mayor F. Ted Wheeler's banning the use of CS tear gas by the city's police, and the police bureau's outrageous, almost instantaneous public whining about that directive. Given that the mayor is also the police commissioner under Portland's quaint "city commission" form of government, the official police statement, prepared and published at taxpayer expense, was way out of line, and another example of the rogue nature of law enforcement in this city.

Today comes news of the mayor's reaction, and it shows why people are fed up with him. What does he do? He sends the chief a stern email.

In an email to [Policer Chief Chuck] Lovell and his assistant chiefs the next day, the mayor wrote that "while I do not often issue directives to the Portland Police Bureau, when I do I expect them to be followed. Civilian oversight of the Police Bureau is set in the Portland City Charter, and every sworn officer takes an oath to abide by that charter. Professionalism and public service demand nothing less."...

Wheeler, through his staff, issued a statement: "PPB's decision to put out a press release questioning my direction was a serious breach of protocol and an inappropriate use of City communications resources. I made it clear, in no uncertain terms, to the Chief that this cannot happen again."

Yeah, right. You can hear the cops laughing from here.

It's a familiar laugh. The mayor, and the rest of the City Council for that matter, are a regular font of grave pronouncements to the cops – proclamations, resolutions, and the like – but somehow they never make a difference. The police around here answer to no one but their union.

Wheeler's email on Friday asked for by today, Sept. 16, "a plan to provide for the public to safely express their first amendment rights, prevent violence and stop criminal activity, secure the partnership of neighboring jurisdictions, and abide by the directives I have laid out."

Wheeler also demanded by Wednesday "a new media protocol to improve coordination and awareness and send it to my Chief of Staff for our evaluation and approval."

The Twitterverse had some pretty funny reactions: "Another after the fact wet noodle lashing by Mayor Tapioca." "Mommy and daddy are fighting again." "It’s like he’s the Susan Collins of mayors."

And more seriously, "You’re Daryl Turner’s boss, act like it."

Ted's got about a month to reverse some bad-looking poll numbers. Get ready for some more strong emails.