Let's have an all-star Portland protest 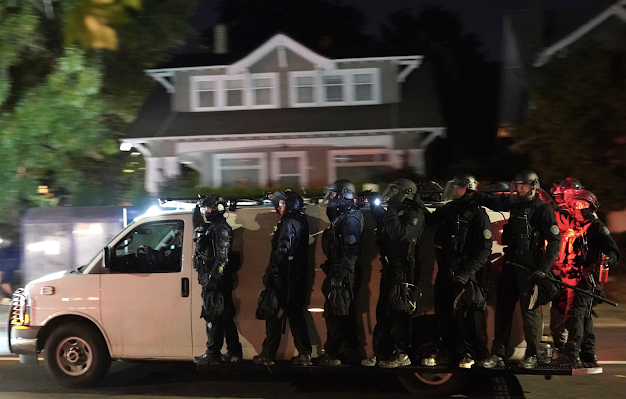 The Portland cops have posted their arrest list from last night. There were 59 people arrested. If there were 300 protesters, that's just about 20 percent of those in attendance.
Reading the list, I wished they'd also publish a box score on the police side. They could show each officer and his or her statistical categories for the night: tackles, tear gas canisters thrown, rubber bullets fired, faces maced, tires slashed, etc. Then we could compile season statistics, and designate an MVP.
And given how repetitive the nightly events have become, we need the equivalent of an all-star game. A protest with only the most prominent demonstrators versus the most notorious police. It wouldn't count in the standings, but it would help burnish the Portland Protest brand.
Fans could vote for their favorites on both teams to join the rosters. The Navy vet who took the beating, the cop who slashed the tires on the Timbers Army van, all the fan favorites would be there.
Of course, the gold star sponsor would be 7-Eleven.
Each team of stars would have a manager. On the police side, Mayor Ted Wheeler, of course. On the demonstrators' side? That's a tough one. They don't like to be managed. Maybe Commissioner Jo Ann Hardesty.
The different venues could compete to see which one hosts the event. North Precinct? The federal courthouse? I'd be rooting for the police union office. You could deck the place out in red, white, and blue bunting. Governor Kate Brown could throw out the first Molotov cocktail. U.S. Attorney Bill Williams could have a box of prime seats right behind the police bunker.
I think it might be helpful to start the all-star protest with a moment of silence and the playing and singing of our national anthem. There are plenty of musicians in need of a gig right now. And scorecards! Where are the scorecards? I guess this blog is it.
* * * * *
Meanwhile, as if there weren't enough websites to look at concerning the protest situation in Portland, today the state police started giving their version of events on Facebook.

On Saturday, September 5, 2020, Oregon State Police assisted our partners at Portland Police Bureau with the rioters in...

I can't find that language in a state police press release anywhere else at the moment, and so it appears that Facebook is the only place to go to find such things. It's not a lot different from what the Portland police said, but that may not hold true in the future.
For example, on Wednesday, the state troopers posted this statement on Facebook about working with the U.S. attorney as federal deputies, in cases in which the county district attorney won't prosecute:

OSP has worked with the US Attorneys office to review OSP arrests for potential prosecution of criminal behavior. Most...

Interesting. Another bookmark to add, I guess. Down the hole, we all go.
Labels: City of Portland Crime Law Oregon