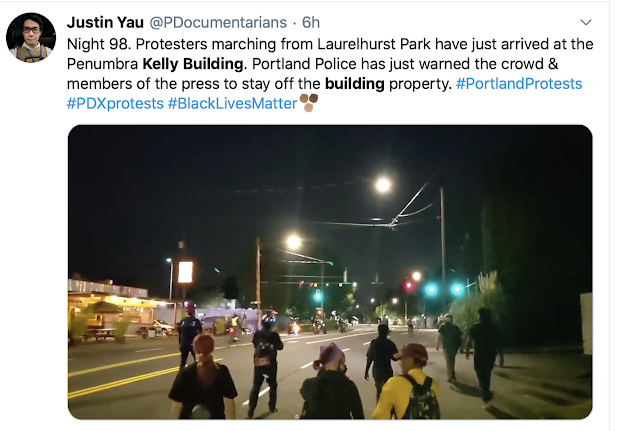 If it had been four months ago, it would have been something, but in light of everything that's happened since then, last night's Portland protest was pretty dull. About 100 people marched from Laurelhurst Park to the police precinct/sheriff's office at 47th and East Burnside. Standing in the street, some threw water bottles at the building, and maybe a few rocks. They definitely made some noise.

But they seemed a little tired.

The police "bull rushed" only once, not nearly as violently as they did on Sunday and Monday, and they made only two arrests. Although I didn't see the cops slash any tires on this night, they did hassle the protesters over their vehicles. They towed a car, and one of the two folks arrested was charged with disorderly conduct and "failure to display drivers license."

The police DJ From Hell made his usual apocalyptic announcements throughout, although even he sounded fatigued. "Stop throwing things," he bleated at one point, with uncharacteristic succinctness.

A scary moment came when a car with Oregon Ducks vanity plates went roaring up Burnside, narrowly missing some demonstrators. The cops say they pulled the car over up the road and gave the driver a ticket.

There were a lot of officers on the street, and in vehicles, and on motorcycles, at various points during the evening. For a police force that couldn't show a single face at last Saturday's Trump caravan and counter-protest, which led directly to one death and indirectly to another, they sure did have many dozens on hand to deal with last night's events, which were petty annoyances by comparison.

The crapshow went on until about 2:00 in the morning. The police version is here.

In other protest-related news, a woman is suing one of the MAGA parade drivers from Saturday's debacle. She says the guy intentionally hit her with his truck and injured her elbow. She's asking for $45,000 in damages. She also encountered a Portland policeman often identified as an ally of white supremacists; this cop, she asserts, wouldn't take a report on her complaint about the truck and her elbow.

But maybe the biggest news of the day is the latest on federal prosecution of crimes committed at the protests, where no federal personnel or property were involved. That story is enough for a post of its own.