Okay, so now we have a dead guy 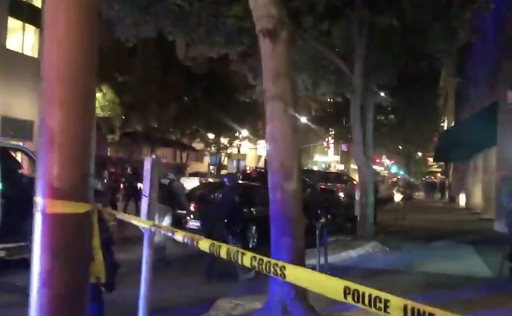 To no one's surprise, a protester was shot and killed in downtown Portland last night. The deceased was apparently part of a right-wing crowd that drove a caravan of pickup trucks and other oversized vehicles from Clackamas Town Center and Clark County, Washington to and through downtown Portland.

It was a wildly dangerous, out-of-control scene downtown. Protesters and counter-protesters engaged in all-out brawls, much like the one that erupted and continued for several hours last Saturday. This time, large rolling vehicles were in the mix.

It's not clear who shot the dead "patriot." Whoever it was, shot him and walked away. It was on the Third Avenue side of the SmartPark garage between Alder and Morrison. The police are "investigating."

So is Twitter. There are some pretty telling photos. I suspect the shooter will be identified before too long.

I will repeat what I wrote here less than two weeks ago, when a right-wing demonstrator was beaten unconscious on a downtown street. Maybe now that we have a fatality, someone will listen:

I don't know where the mayor and the governor have been all weekend, but they had better wake up and act soon. I'm happy I'm not in either of their shoes. However, if I were, I'd have to be considering something along these lines:

1. A state of emergency.

2. A citywide curfew, from sunset to sunrise, until things cool off. And a huge enforcement effort to back it up. I'm talking National Guard level. Along with a place to detain, overnight, up to hundreds of people who won't comply. The Convention Center would work. Or the Expo Center. Or an airplane hangar out in Troutdale. You want to protest? You still have 14 hours a day to do that. But if you march around at night, you go to jail.

3. Tight police monitoring, and controlling, of the "counter-protesters," just as the cops are all over the "protesters." End the widely held perception that the police are white supremacy sympathizers.

4. A demand that the rookie district attorney get off his high horse and get on board with enforcing a curfew.

5. A new police chief. The guy who's in there now can't handle this.

Because someone is going to get killed.

I repeat: Someone is going to get killed.

Crazed zealots firing handguns and trying to run people over? Raging mobs beating people unconscious? The majority of Portlanders have had enough. It has to be stopped.

Now someone has, in fact, been killed. Do we keep up the wishy-washy response and have more blood on our hands? Do we keep feeding the Fox News propaganda machine? Mayor Ted, Governor Kate, Chief Chuck – get going or step down!

Footage of shooting in Portland tonight, just minutes ago. No details yet.