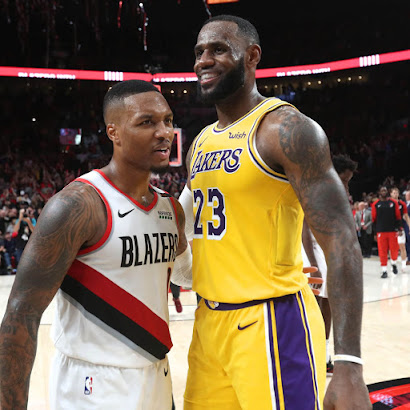 Well, the Blazers got what they went to Disney World for – a seven-game playoff series against the Lakers. Blazers-Lakers playoffs are a great tradition. At the end of August, though? That's just weird. But is it Portland weird?

The Lakers have been kinda slouchy in the "bubble" games in Orlando, whereas the Blazers have been pretty hot. A writer in the New York Times got off a great line yesterday when he referred to "the Portland Trail Blazers, who are riding the molten brilliance of Damian Lillard." Meanwhile, the Lakers star LeBron James said last week that he wasn't in a playoff mindset and wouldn't be "locked in" until his team knew who their opponent was.

The game starts at 6. The sounds being pumped into the spectator-less Disney gym will be as if it were a Lakers home game, but let's face it, nobody's at home in Orlando except the cartoon characters.

The Blazers will have their hands full. Zach Collins is out with an ankle issue, and along with King James there is Anthony Davis to deal with. Big Nurk had better stay out of foul trouble, and guys like Gary Trent Jr. and Carmelo have to contribute like never before. But the Blazers can score 135 points some nights, and if they do that, they only have to hold the Lakers to 134.

Beat L.A.! We've been saying it for 50 years. Say it loud during the dog days.