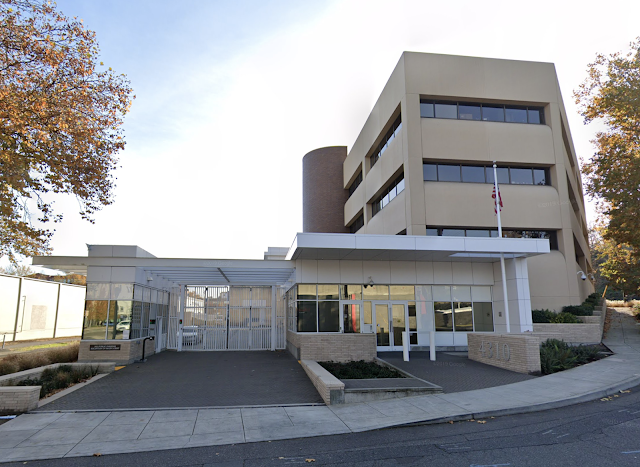 I see that tonight's Portland Protests are heading down to Elizabeth Caruthers Park. That's the park in the middle of the South Waterfront district, known affectionately to some of us as "SoWhat." There used to be a public storage place on that lot, which the city had to pay a fortune in taxpayer dollars to get rid of. But hey, anything for Homer Williams and the condo weasels. It's such a "vibrant" scene.

Anyway, the location is significant, in that it signals that the demonstration will move to the immigration jail that's a Molotov cocktail's throw away from that park. As long-time readers of mine may recall, the siting of that hideous jail, which was being passed off at City Hall as an office building, led to some of the more interesting moments in my blogging career.

In the current context, taking the protests to this federal facility means that the federal paramilitary that has been occupying Portland could show up in force. As far as I can tell, they've never really left town, even after some sort of deal was supposedly cut with the governor for them to step down. And a lot of these poorly trained, vicious federal troops are from the Border Patrol. So if the kids act up at the immigration jail, they're doing so at the stormtroopers' own house.

Remember, there are no state troopers around any more to "quell" things, just the Portland cops. And the Portland cops seem happy to let things get way out of hand before stepping in. Which could mean a federal reaction.

The feds and Portlandia have had it out on this site before, a couple of years ago. It was a long "occupation" of the area by protesters, who forced the facility to close for a while. They were ultimately swept out by heavily armed federal agents. I suspect the protesters are not planning another long-term siege down there this time; they're having too much fun taking their roving riot to different parts of town. Whatever goes down will go down in one or two nights. Which could ramp up the intensity.

In any event, things could get tear-gassy in a hurry. So if you're down that way tonight after 9 – say, traveling on Macadam Avenue or even on I-5 near there – stay alert.