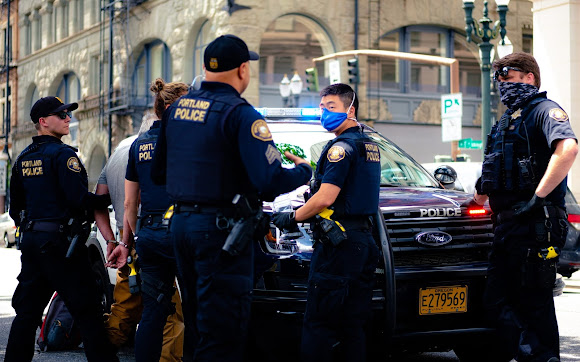 There were no public protests in Portland last night. Mostly because people are tired, I think. And so in the weeks ahead, when you read that there have been demonstrations in Portland every night for X number of nights straight, understand that the stories are not true. There have been several no-protest nights since these events started in May; in fact, there was an entire week off for the wildfire smoke (a little of which has returned to the area this week).

There was some protest-related news yesterday, however. Maximum Maxine Bernstein at The Oregonian published a piece about a recent report from an outside consulting firm that has been examining the way the Portland police bureau investigates itself when somebody is killed by an officer or dies in custody. The protesters are mad about a lot of things, but the current setup for reviewing police use of deadly force is probably at or near the top of most demonstrators' lists.

There's a lot in the report, by the OIR Group, but Bernstein led with this:

Portland police training instructors have “stepped out of their lanes” to vouch for officers in fatal shootings before grand juries even though they had “only a passing familiarity of the facts,” city-hired consultants found....

In three of the six shootings reviewed in this report, the Multnomah County District Attorney’s Office called police training officers to testify as expert witnesses and all said the officers had followed proper instruction in using deadly force.

But in each of the three cases, police hadn’t completed internal affairs reviews.

“There is no evidence that the Training officers had any opportunity to review the investigative materials in the relevant cases,” the report said. “Even if the officers had been provided with the complete criminal investigative files, it was inappropriate for a Bureau officer assigned to the Training Division to opine about the propriety of a shooting before the administrative investigation had been completed.”

The consultants also highlighted other concerns from problematic police questioning of a shooting victim after he had declined to speak to detectives, to a prosecutor who seemed to suggest before a grand jury that a 2018 shooting should be labeled a “suicide by cop” contrary to any evidence offered....

Portland State University officers and medics from Portland’s Fire & Rescue Bureau "ignored or defied requests'' when subpoenaed to answer internal affairs questions about a death in police custody of Richard A. Barry, 52, on Nov. 22, 2018, though they were on the scene and could have provided key information....

The entire report, which is nearly six months old, is available on the city's website, here. There are seven previous reports from the consultants, dating back to the police murder of James Chasse in 2010, here.

Buried way down inside the O story is probably the biggest wrong thing about the way Portland investigates police killings:

The consultants continue to urge the Police Bureau to interview officers who use deadly force before the end of their shifts, quicker than the 48-hour span after a shooting that is now the standard.

Officers involved in Elifritz’s shooting in the shelter, for example, were able to view a video of the shooting that was posted on Twitter by a witness before they were interviewed by the bureau investigators. The viewing of the video may have shaped their statements to investigators, the report said.

If an officer who uses force doesn’t voluntarily agree to an immediate interview, they are given 48 hours to be questioned by internal affairs. “We believe the delay is necessary to fully process the scene, review witness statements, and uncover evidence that will allow us to conduct a comprehensive interview of the member,” the bureau responded to the consultants.

The 48-hour rule is bogus, and until it changes, there will continue to be zero confidence among most Portlanders in the police discipline system.

I was surprised that the O story didn't do more with the upcoming citywide ballot measure, Measure 26-217, on police accountability. It would create a new police oversight agency. It probably won't fix the problems with the current system, and it's probably illegal in that it violates the police union contract, which the City Council foolishly renewed for another year in late June. But it's something, and only a fool would bet against its being approved by the voters a month from now.

I'll try to do some homework on the ballot measure before the ballots get here. In the meantime, if you're interested in police accountability, then Bernstein's story, the underlying report, and the older reports make for some timely reading.