Among the flyers that came in today's mail was this one on the proposed property tax increase for Portland parks: 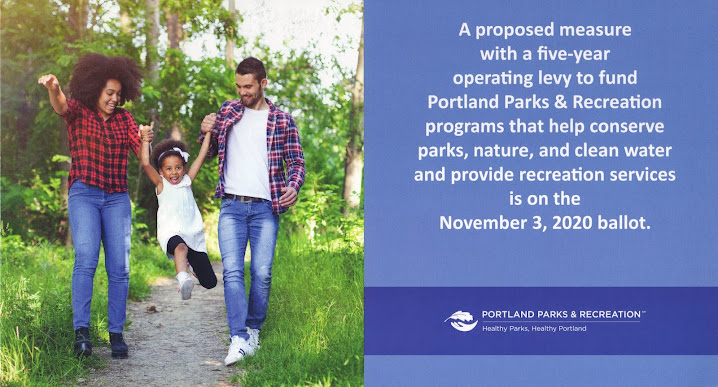 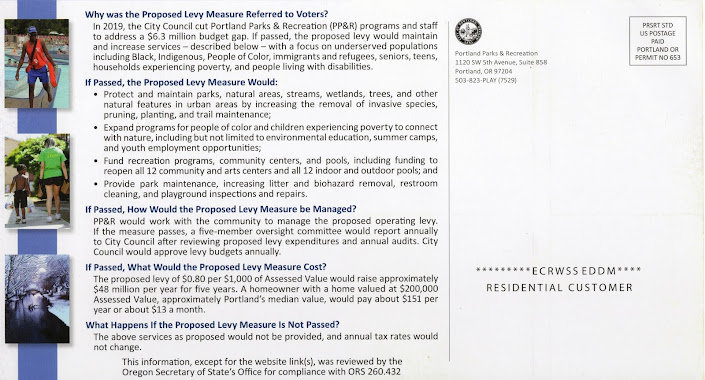 It's a pretty one-sided view of the property tax ballot measure. It explains all the wonderful things that will happen if the measured passes, gives one estimate of how much it will cost, and states in one sentence what will happen if it doesn't pass. Plus, who can resist that adorable family frolicking in the park?

If you said (a) or (b), then you just accused Portland City Hall of breaking the law. That flyer didn't come from a Yes on 26-213 committee (or, of course, from a No on 26-213 committee). It came from the Portland parks bureau. The taxpayers paid for it.

No public employee shall solicit any money, influence, service or other thing of value or otherwise promote or oppose... the adoption of a measure or the recall of a public office holder while on the job during working hours.

You'll notice that the flyer states that the Oregon Secretary of State "reviewed" the "information" presented "for compliance with" that state law, and presumably, she said it didn't violate it. But did the "information" she examined include the cheery photographs? And the omission of any statement of the negative economic impact of the measure? Or omission of the total price tag ($239 million)?

I assume the state law is why the flyer doesn't include the ballot measure number (26-213). But it's curious why showing that number would be considered "promoting" the measure, and listing all the goodies it would bring isn't.

The same thing is going on with the hideous Metro payroll tax measure. That scary flyer that we wrote about on Friday? Paid for by Metro government, "reviewed" for compliance with the state law, yet clearly supporting the measure, with no argument against or disclosure of negative impacts.

It appears that the politicians and bureaucrats who are reaching into your pocket for new taxes are also pushing the envelope when it comes to spending public money on political campaigns. It's not a new practice around here. But it's wrong. If the city and Metro haven't broken the letter of the law, they surely are violating its spirit.