Protesters screw up twice in one day 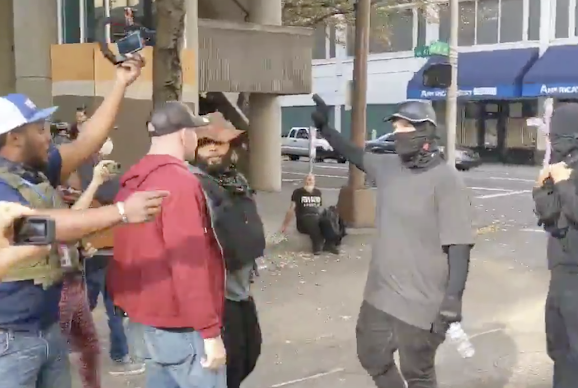 It's hard to keep up with the Portland protest news. It runs day and night any more. But a lot of it may not matter much in the long run. Yesterday there were two incidents, and to me, both of them showed how pointless, and even counter-productive, the left-wing protesters can be.

In the first incident, a group of right-wing types had showed up downtown where the fatal shooting of a "patriot" fellow occurred on August 29. There weren't many of them. With their guns and mace cans and sporting their MAGA hats, they seemed kind of pitiful, actually. They stood around, exchanging hateful shouts and gestures with people in cars passing by. One of the more notorious "proud boy" types was apparently in the crowd, and he drove around giving his spiel through a bullhorn. I don't know these people's names, nor do I want to know, but the lefties do.

Anyway, to me the smart thing, the right thing, for the left to do in this situation is to let these people hold their pathetic little vigil or whatever it was, and then get back in their pickup trucks and drive home to Battle Ground or wherever. But of course, that is not how the Portland left operates. And so the black-clad nighttime demonstrators showed up and starting shouting and hassling. There was some pushing and shoving, and mace was sprayed.

The cops showed up and stood between the two groups. Eventually the righties left, being hounded by a crowd chanting "Nazis go home." No shots were fired, and no one was arrested, that I could see.

Before leaving this incident, note that there is no mention of it whatsoever on the Portland police bureau official propaganda page. That's interesting. When the Black Lives Matter types instigate so much as a bake sale, there's a story about it on that page. The police show photos of a rock they found on the ground that could have been thrown at an officer and a spatula that could have been used as a weapon. But when the heavily armed "proud" come to town and require a dozen cops or more to prevent somebody from being shot dead, there's no mention. The next time the protesters complain that the police are white supremacy sympathizers, think about that.

On to the second incident, late at night. The dissidents assembled at Waterfront Park and marched to the brand, spanking new county courthouse at First and Jefferson, and immediately spray painted graffiti on it like a cat pissing to mark its territory. Portland has waited for that courthouse for how many decades? And here are our wonderful "woke" protesters defiling it, hours before it is supposed to open. 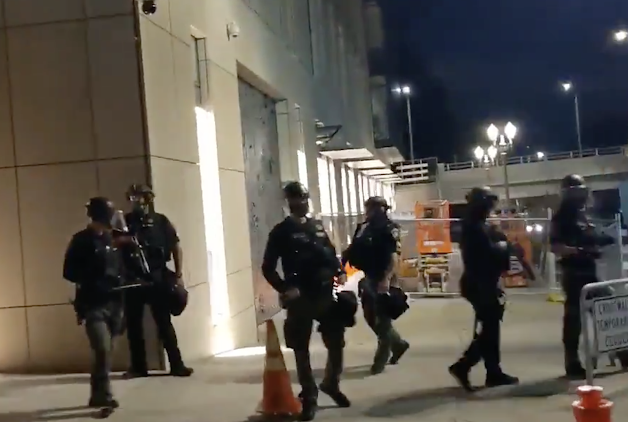 County sheriff's deputies came out and moved the crowd back. Apparently, they fired some "less lethal" ammunition, as one protester was seen bleeding from lacerations on her face.

The demonstrators then did a "greatest hits" tour, marching to the Justice Center and the federal courthouse before winding up at City Hall. The Portland police, who had joined in with the county deputies, eventually appeared and started arresting people. It's not really clear why, but arrest they did.

The protesters tried a new tactic whereby they all held on to each other, but the cops managed to peel off six people for arrests. The charges are the usual junk that the county d.a. probably will not pursue. I doubt that even law-and-order U.S. Attorney Billy Bob will care. The official police version of the nighttime incident is here.

As usual, Sergio Olmos, Justin Yau, and Laura Jedeed were out there showing us what was going on. Thanks to them, and to the others whose feeds I missed, because if it were up to the cops and the mainstream media, no one would have seen or heard most of what went down in either incident.

The cops were bad, particularly in their late night surge, but in the jackass competition, I think the protesters get the win for yesterday. They should have left the anemic right-wing demonstration alone, and they really didn't need to write all over a brand new public building. They hurt their cause, twice.