Trouble ahead, trouble behind

It's another mildly ugly morning on the Portland protest front. First, a look at last night's action, as tweeted by Sergio Olmos and others: It was back at East Precinct, a.k.a. the county sheriff's office, on East Burnside. About 80 demonstrators were there, apparently. They blocked the street and danced around again. One person threw a firework, reportedly. After midnight, three people were arrested for trespassing on the police property. Pretty tame stuff. The police version is here. 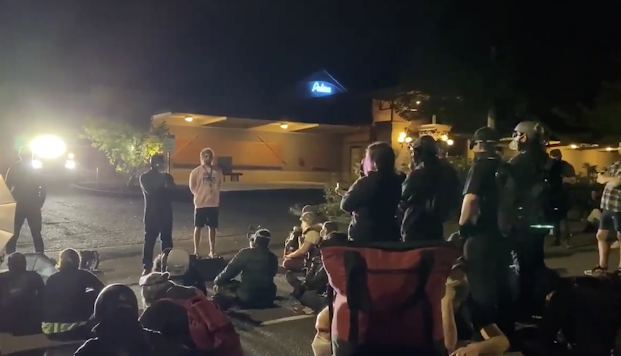 Some in the crowd were in an ornery mood, however, over a front-page New York Times article recounting how the protesters accost, or some might even say harass, neighbors along their march routes. I have no doubt the story is accurate, but it seems a little overblown. Once again, the Times is playing right into Trump's hands, and folks, I don't think it's an accident.

We're all holding our breath for Saturday, when the right-wing wingnuts are scheduled to drive their monster trucks into Portland again for another one of their Trump parades. The last time they did this, two people wound up dead. This time, they say they're going to Delta Park. At least, that's the latest word I've read. Meanwhile, the left-wing wingnuts are assembling at Peninsula Park at the same time. There's about an hour's walk or a seven-minute drive between them. I can't believe they aren't all going to wind up downtown for a throwdown.

The forecast calls for showers and breezy conditions.

Meanwhile, the Washington Post has this fascinating story of a guy from Ukraine who's been organizing some of the right-wing activity in Portland by remote control from his apartment in Boise. Here he is on Facebook. There's a Putin-esque odor to the whole thing.

And to top things off, this morning the site Politico has an uneasy assessment of the situation in our city:

“Looking at what’s on the ground right now, I think Portland in a lot of respects represents a worst-case scenario, in terms not of how bad it could possibly get, but how bad it is now,” Mark Pitcavage, who researches domestic political extremism with the Anti-Defamation League, told POLITICO. “It’s hard to be optimistic in the near- or medium-term for Portland....

“I thought some of the recent killings might cause some people to pause for a moment, take a breath,” Pitcavage said. “But that doesn’t seem to have happened, and I don’t see any reason for it to go away in the conceivable future.”

The whole thing is here.