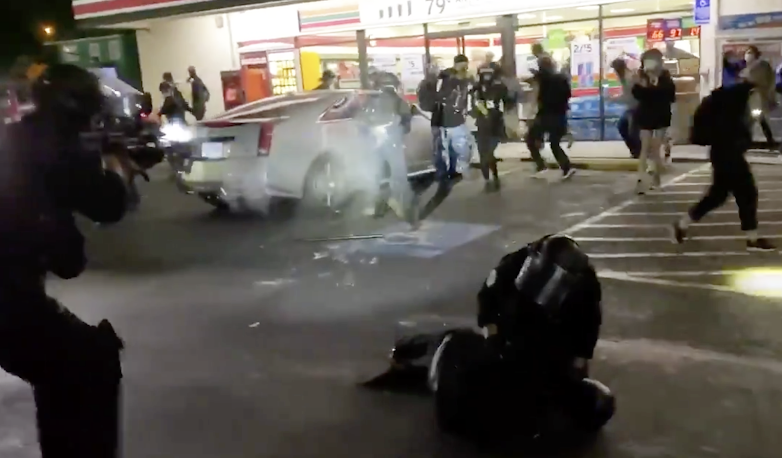 Last night's protest in Portland continued the trend we've been seeing for a week or so: The police are making more arrests, more brutally, and with less provocation.

The scene was the police union office on North Lombard. More than 200 protesters showed up after dark – nothing new there. But this time, they were met with a line of state troopers instead of city cops.

The protest was relatively mild. There was some chanting and taunting, and I think the street was blocked for a while, but from my Twitter vantage point I didn't see any of the usual fires going anywhere. Nor did anyone appear to be trying to bust their way into the union office, as has happened several times before. There were some balloons floating around – with air in them, not paint – but if any hard items were thrown at the police, there clearly weren't as many as on some other recent nights.

Be that as it may, the cops still declared an "unlawful assembly," and the state troopers, joined by Portland police, executed several "bull rushes," in which they tackled or threw to the pavement those who were too slow to get away.  One young woman came up from the asphalt with her face covered in blood; the police arrested her and took her away in an ambulance.

This is what Portland Police and Oregon State police are doing to nonviolent protesters. pic.twitter.com/glmAnBt6iM

The police's Orwellian DJ From Hell kept announcing that these were "targeted" arrests, but in truth, they seemed to be just whoever didn't hustle away from the charging cops fast enough.

The state troopers seemed particularly reckless with the "less lethal" munitions they were firing into the crowd. They weren't aiming low. People were getting hit left and right, including some who were trying to get away. They took the pepper balls, rubber bullets, or whatever it was coming out of those rifles, in their backs. 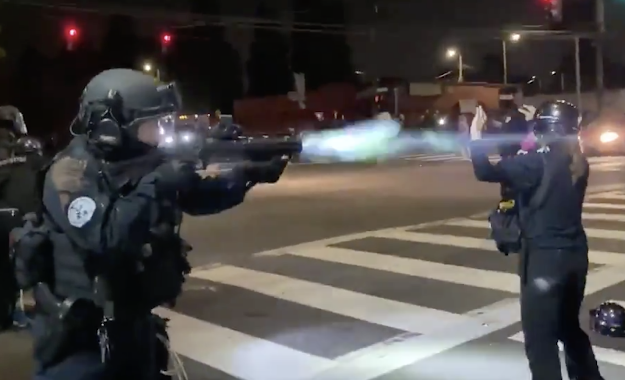 There was no tear gas deployed, and the action seemed to be pretty much over around 2 a.m.

It appeared that a couple of dozen people were arrested, but at this hour the police version of events hasn't been released, and so I don't know what the final tally was. Nor does anybody know who will be prosecuted, and by whom, in the law enforcement crazy quilt of Portlandia.

But suffice it to say that it was rough night for quite a few demonstrators. In absolute terms, they may deserve what they got and what's coming to them next, but relative to what protesters have gotten away with on other nights, they were punished pretty harshly.