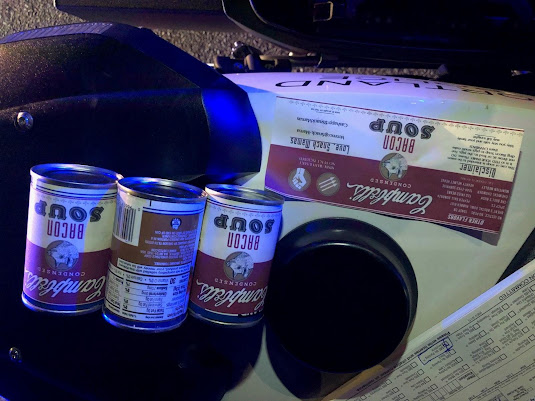 There wasn't much to see on the Portland protest front last night. I guess everybody was too busy watching Orange Caligula give a shout out to the "Proud Boys" in the debate. What a national disgrace. But now we'll stop talking about his taxes, I guess.

Sergio Olmos, a journalist whose work on the protests has been spectacular, this morning has provided this highly informative highlight reel about that group. If you're interested, click on this marker to see the Twitter thread.

Trump on proud boys “stand back and stand by”

Anyway, last night there wasn't too much to see, and certainly nothing new. About three dozen protesters showed up at the East Precinct/sheriff's office on East Burnside Street. It seemed like there were more riot cops and media types than there were demonstrators.
With not enough people to mace and tackle, the cops went into their motor vehicle inspection mode. One car was towed on the pretext of being too close to an intersection. Another car was stopped, and the driver was cited and the car towed because it was not insured.
The cops say they found a lot of bad, bad things in the two cars. Cans of soup, those evil shields, gas masks, paintball guns, and the like.
Two or three people were arrested for getting too close to the building. The official police version is here.
As often happens on a slow day on the street, there was quite a bit of indoor action, of a political nature, in connection with the protests. Those stories reveal that law enforcement in Portland is a chaotic mess right now, which makes it both ineffective and unusually dangerous. Those developments are worth a separate post.
Labels: City of Portland Crime Law