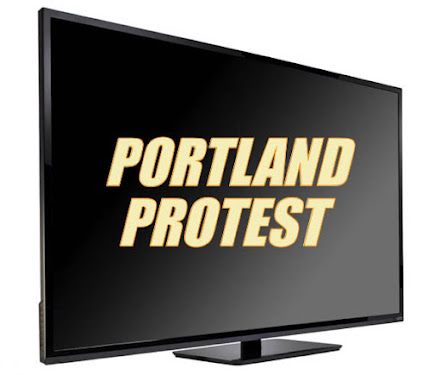 There are so many people live-streaming the Portland protests, I'm surprised there isn't a Portland Protest cable TV channel by now. Almost every night you could have a pre-protest show, the protest itself, and then a post-protest show. During the day and on the occasional off-night, you could re-run classic old protest footage, and there could be an hour-long wagering show in the afternoon, discussing various gambling propositions for the evening ahead.

"The over and under on Molotov cocktails tonight is 1.5. Which way are you calling that one, Bob?"

"My best bet is Officer 67 to punch two people smaller than him in the second bull rush. Sixty-seven doesn't usually get warmed up for the first half hour or so, but then he really brings it."

"The cops were the big winners in the jackass competition on Saturday, but I'm expecting the protesters to bounce back tonight. I'm taking Antifa plus the points."

"In a series like this, Jason, it's all about adjustments."

"I think the DHS is going to leave it all out on the courthouse steps tonight."

"It's time for our Black & Decker Leafblower gas toss of the night..."

You get the picture.

But last night would have been a re-run night, because I saw no evidence of any new protests in Portlandia. Everyone was exhausted from our eventful Saturday.

The Sunday morning mainstream media accounts were all about the lack of physical contact between the right-wing and left-wing groups during the day on Saturday. They missed the story from Saturday night, which was the viciousness of the police response to a demonstration that so far had done nothing more objectionable than obstruct traffic on a street.

I really do think the old-school media around here stop working by 11:15 p.m. Especially on a Saturday or Sunday. With the protests, things are just beginning to get interesting at that hour.

There was enough chatter on the internet all day yesterday, however, that at least a few professional stories on the police antics were posted by last night (like this one), and even Governor Brown sort-of-admitted on Twitter that maybe her glorious "Unified Command" might possibly have screwed up after dark.

She "requested" that the various police agencies commence to investigate themselves concerning possible misconduct. Yeah sure, that will help.

Anyway, the kids in black are planning another ruckus this evening. They're reportedly set to assemble at Kenton Park, which means we'll probably be watching action at the police union office by around 9:30. If the police are already out in front of the building by that hour, expect a night played by the books. If not, expect the demonstrators to start fires, and the police to storm in and kick a lot of people's tushies.

It's largely up to the police how these things go. We'll see what mood they're in tonight.

I doubt we could get Charles Barkley for the pre-game. I wonder if Randy Leonard is available.