Wheels coming off for Wheeler 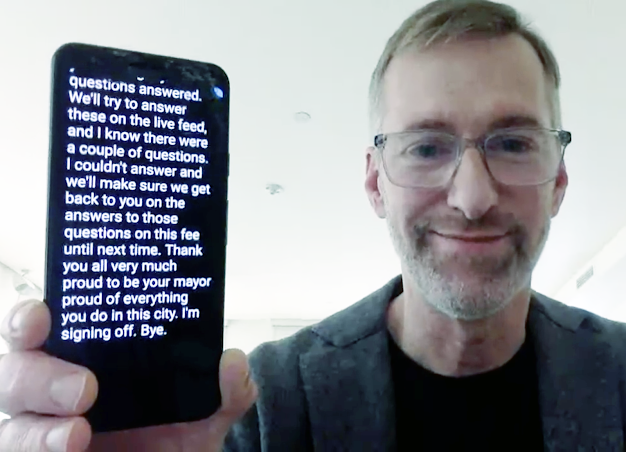 When he came in just short of 50 percent of the votes cast in the primary back in May, it was unthinkable that the mayor of Portland, Ted Wheeler, could lose in the general election in November.

But a lot has happened since then, starting with the on-camera police murder of George Floyd in Minneapolis. Since then, Portland has become the epicenter of public unrest about police brutality and racial injustice. And the mayor, who has been cussed out by protesters so often this summer that he should change his name to F. Ted Wheeler, has satisfied pretty much no one with his handling of the protests. Or with his handling of the police bureau, of which he is directly in charge under the quaint "city commission" form of government we have here.

A new poll shows Wheeler with an unfavorable rating of 63 percent of likely voters, with only 26 percent viewing him favorably.

The survey of 435 voters deemed by pollsters likely to vote this fall found that 59% of them feel Portland is heading in the wrong direction. Most of them also support the Black Lives Matter movement and more of them name homelessness as an “extremely important” problem facing the city than any other issue. Support for Black Lives Matter was particularly strong, with 76% of poll respondents saying they view it favorably and 22% saying the opposite.

Now, keep your salt shaker handy, because this poll was sponsored by a group behind the ballot measure that would change the police discipline system, or at least try to. But still, Wheeler is in real trouble. Some people want the protests crushed. Some people want the police bureau to be handed over to the more radical Commissioner Jo Ann Hardesty, which would be a blatant challenge to the police union. Others are concerned that the endless protests in Portland, which often end in violence, are helping the Trump re-election campaign. But few people are happy with the way the protests are being handled. The cops are doing the same thing night after night, and expecting a different outcome.

Wheeler seems paralyzed – either that or just stubborn. It wouldn't be the first time that he's dug in his heels on the wrong side of events. I remember back when he was state treasurer, and there was a flap about the expenses being racked up by his "masters of the universe" investment advisors. These were state employees, but Wheeler was determined that they shouldn't haven't to play by the same rules as everyone else. Eventually, as I recall, he backed down, but it took way too long.

His mistake this time around, and it may turn out to be fatal, was blandly voting to renew the police union contract for another year back in late June. At that point, George Floyd had been gone for a month, and Portland had been seeing protests every night for that month. F. Ted could have told the union, "Look, I know we've been bargaining cordially up to now, but given what's happened, we're not renewing that contract without changes." The union would have gone nuts, and they would have pulled all sorts of stunts, but the mayor would have made a real statement – one that three quarters of the city's voters would have agreed with. Instead, he told the protesters, "Be patient. Let's roll up our sleeves and have a study group."

So I guess we had better start taking a serious look at his opponent, Sarah Iannarone. My initial assessment was that she'd be even worse than Wheeler, but I didn't investigate all that seriously because I didn't think she stood a chance. Now, she's got one, and so some homework on her is in order.

Also, there's an organized write-in campaign going for another candidate, Teressa Raiford. Write-ins don't win, but they can pull votes away from the main candidates. I would guess Raiford helps Wheeler, but again, until now I haven't looked.

Anyway, Wheeler may be in Tahiti for the spring, which is pretty amazing. Thanks for coming to my Ted talk.