A tale of two cities

It was another day of demonstrations in Portland on Labor Day. Our neighbor to the south, Salem, also saw action.

In Portland, several hundred people rallied in scenic Cathedral Park, under the St. John's Bridge, in the afternoon. Music and speeches. They went on a march through the neighborhood. From what I gather, it was peaceful by any measure.

Much less blissed-out was a large Trump truck caravan that started in Oregon City and ended up at the State Capitol in Salem. There the right-wingers were met by a smaller group of lefties. Hostilities ensued, and several on the left were thrown to the ground, beaten, and maced by demonstrators on the right. 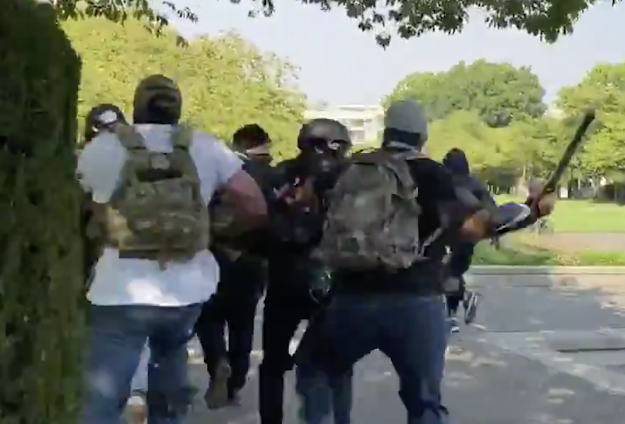 Two of the Trump types were arrested, but they were seen later walking away from the local police.

The intrepid Sergio Olmos once again provided invaluable video, this time on the Salem shenanigans. Without his footage, a lot of what happened would have been denied. That's what journalism is all about. Anyway, for all the hours Olmos is putting in, I hope he gets a nice book deal out of this.

People are already marking their calendars for the 26th, when the militant right plans a party in Portland. Their last one left two men dead. I'm praying for heavy rain the day they come back.

Although the left-wing protesters whine a lot, they have a point about the police letting the Trump types get away with stuff. Yesterday, a bunch of the "patriots'" monster trucks were cruising the interstate with duct tape over their license plates. And most of the occupants were armed to the teeth. If they were African Americans, you probably would have run out of space in the jails and at the morgue.

There didn't appear to be any nighttime protest in Portland, or in Salem, last night. That's probably because the wind and the air quality were too miserable. With all that forest fire smoke, tear gas would have been redundant.