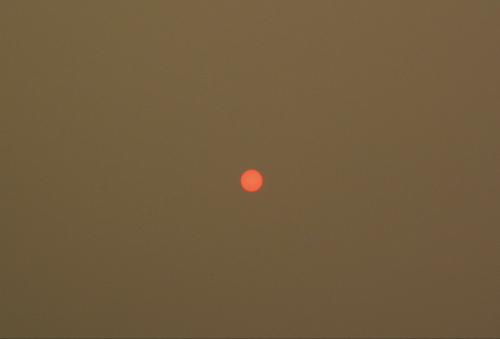 Labor Day is the unofficial end of summer. Usually it's a wistful moment. But this has got to have been the worst summer in a long time for most people. No need to write up the full list of woes – you know what I'm talking about.

And so, to end the summer of 2020, it was only fitting that here in Portland we had hellacious east winds, which had been forecast, and choking smoke, which had not been.

The daylight was that hideous orange that comes from being downwind from a forest fire. Everything stunk. The bad air even came through the walls of our old house.

I was out in the yard struggling to get the garbage out to the curb and a few things watered, when several big gusts came whipping through. The flowers we had been admiring for weeks bent over, almost all the way to the ground. Dust and debris were flying around. It got in your eyes. Limbs on the trees, still heavy with all their leaves, shook and swayed violently.

After a while, our mentally ill neighbor up the street started one of her screaming tirades out on her front porch. It seemed perfect for the moment.

And then the power went out for a couple of hours.

But after that couple of hours, by then well after dark, the lights came back on. The comforts and conveniences that electricity bestows were restored. I pictured the crew from the power company who got things back up and running. Young people, probably, maybe with a veteran or two calling the shots and offering advice. They drove to the scene, cleared away the debris, got the line reconnected. They knew what they were doing.

Part of me thinks that's what will happen with the whole world between now and next summer. I certainly hope so. Here's to the crews, all of the crews.