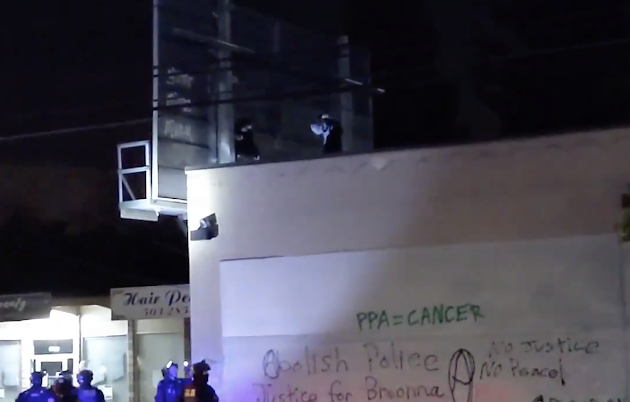 The Portland police made 14 arrests at last night's protest, which went down at the police union office in North Portland. This came on top of the 13 protesters they arrested downtown on Wednesday night. Those are the biggest hauls in quite some time.

Two of the charges from Wednesday night were serious. One guy was accused of attempted murder, among other things, and another guy of arson and attempted first-degree assault, among other things. Even Multnomah County's "woke" district attorney probably won't let those two slide.

Last night's charges were less substantial, and the protest incident itself was far less charged and dangerous. A group of about 100 dissidents marched from Arbor Lodge Park to the police union office on North Lombard. The cops were not there to greet them right away, and so the protesters vandalized the building with spray paint and stood around blocking the street for a while.

I didn't see any dumpster action or fires in the street, but somebody got the bottom of the plywood covering the office door lit on fire, and a couple of others climbed up on the roof of the building. The police said someone also tried to light the building's awning on fire, which has happened before at the North Precinct.

The pyro activity brought in the riot van, and the cops performed a couple or three bull rushes. They were quite intent on making arrests, although as I say, the charges are all small stuff, which I don't think will be pursued unless the feds take an interest.

The official police version of last night is here.

Tomorrow, in the daylight, the right-wingers will be trucking back into Portland, looking for trouble. Based on the rumors circulating, it could be a brutal day. I'm lighting a candle and staying close to the nest.