Portland's mayor, F. Ted Wheeler, held a press conference this afternoon in which he deplored last night's vandalism and property destruction outside the police East Precinct. He also tried to make it sound like attempted murder of people inside the building, which is a bit of a stretch. But he was correct in saying that the stuff that went on was pointless and dangerous. 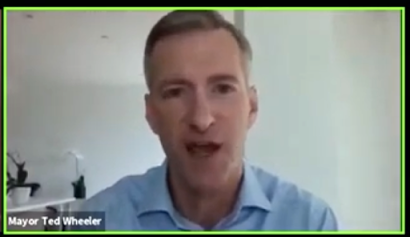 Representatives of the police bureau and other police agencies were also in on the Zoom meeting.
Wheeler asked peaceful protesters to stay away from the demonstrations, or to say something to stop people in the crowd from busting up public property for the fun of it. He also said that he was authorizing the Portland police to "do whatever is necessary" to stop the destruction and "safely" arrest the people breaking the law. The mayor also made the interesting point that the demonstrators are being used as props in the President's re-election campaign.
And so it appears that the battles between the police and the protesters are going to get even uglier than they have been. You know those "disturbing image" warnings they give you on the TV news? This is that.
Labels: City of Portland Crime National