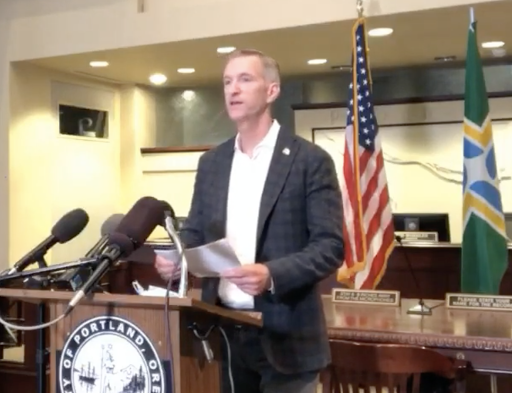 It's Portland Mayor Ted Wheeler's 58th birthday today. I hope he gets some nice gifts.

Including a clue. He desperately needs to get a clue.

Yesterday old Ted and his novice police chief, along with the famous rookie district attorney, held a press conference, because they had to say something after a right-wing militia guy was shot and killed on a downtown street at 8:45 the night before. It wasn't two and a half minutes into reading from his script when Wheeler started in on how it's Trump's fault. Trump this, Trump that.

It was like he was running for Wyden's job. Maybe he is.

Ted needs a different act. The protests were out of control for a month before Trump's private army got here, and the protests have been getting progressively more dangerous and scarier for another month now that the feds have largely retreated.

Granted, the goon in the White House inflames people, but when they start beating and killing each other in the streets of your city, Ted, as the mayor who also serves as the police commissioner, you have the job of saving lives and preventing serious injury.

And before last night was over, you could see clearly that not much has changed out on the streets. If anything, it's getting worse.

The usual gang of protesters marched through Laurelhurst, back to the police precinct on Burnside, and mixed it up with the cops just as they have done dozens of times this summer. The demonstrators blocked the street for a while and threw some stuff at the cops, but I didn't see a fire or an actual threat to the police building. That didn't stop the police. I guess they really needed a big show this time. So in addition to their customary "bull rushes," they made lots of arrests, more than usual. And with less cause than usual. Some of the arrestees really did seem to be doing nothing more than standing on the sidewalk when they were hauled off.

In a couple of Twitter streams, you could see police brutality. Three or four cops would have someone on the ground, and a cop or two would give the person some punches, apparently just for the heck of it. It's pretty standard Portland police procedure to pepper spray the faces of people who are already being held down on the pavement, which is despicable enough, but last night they went with good old fists.

Officers beat a man who they arrested. Another officer forced his head into the ground and wouldn't let up. pic.twitter.com/2ns1DdcpLk

The contrast between the last two Saturdays on the one hand, and last night on the other, was pretty disturbing. When people were literally killing each other in the streets, the Portland cops couldn't get their job done. When some annoying lefties were hanging out on the sidewalk, chanting slogans and throwing eggs, the Portland cops came out in force, kicked their asses, and arrested them on charges that will mostly be dropped.

Meanwhile, the mayor's political rival, Governor Kate Brown, now says she's sending the state police back to Portland to keep the peace. Gee, they were just here and left in frustration because the D.A. won't prosecute people for junk offenses like "interfering with a peace officer." Maybe the geniuses in Salem should make up their minds.

Anyway, what a birthday for Ted. Maybe Nike has a gig for him.