Feds are back at Portland protests 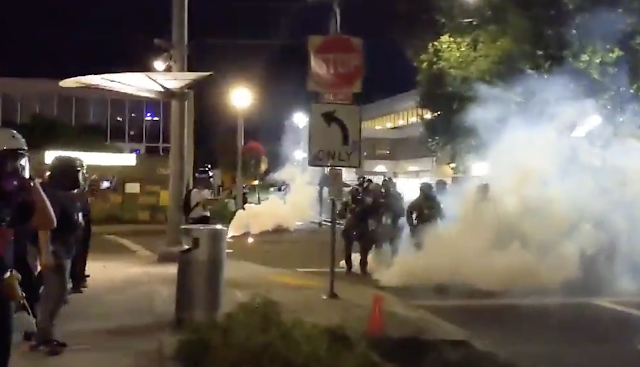 As was expected, the Portland Protesters took their party to the immigration jail in South Waterfront last night. It was the usual spectacle, notable only for the reappearance of the federal troops who had participated in the dramatic scenes at the federal courthouse several weeks ago.

The marchers spray-painted the building, broke a window or two, shined their green lasers at the police, and threw stuff at them. The police (city and federal) "bull rushed" the crowd several times, heaving tear gas canisters and roughing people up. As far as I can see on the intertubes, only two people were arrested, and the charges are the kind that probably won't be pursued. The Tweeter Laura Jadeed had the best images of the night.

The demonstrators built a bonfire using a mattress and some garbage. Then they commandeered a picnic table from a nearby business – someone said it was Little Big Burger – and burned that, too.

The state of the fire is... pic.twitter.com/JnBlGJ2RjG

I'm never gonna get tired of this pic.twitter.com/bokiaiyTT8

The police version of events is here.

Some of the occupants of the nearby apartment bunkers came down to the street to see what was going on. They have not been following the nightly antics, apparently. They're probably wondering if this is what the leasing salespeople meant by a "vibrant neighborhood."

Anyway, it all seemed pretty pointless, as has become the norm at these things. George Floyd can hardly be seen in the rear-view mirror. The 20-somethings are clearly enjoying it, though. And it makes great television for Orange Caligula. And so on it goes.