Cops ratchet up the rough stuff at Portland protests 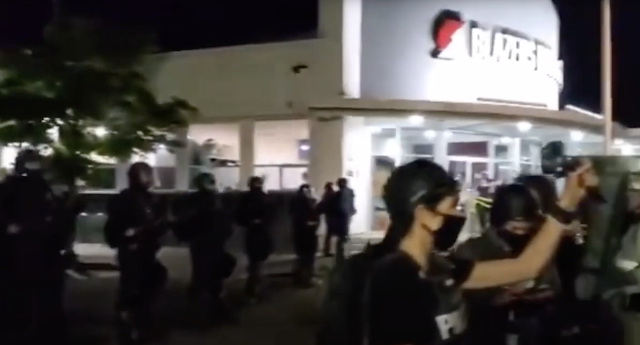 Last night's action on Portlandia Protestia was at the North Precinct, on MLK Boulevard near Killingsworth. It seemed a lot like the night before. A couple of hundred marchers, and dozens of police in riot gear, more or less duking it out. A lot of police vehicles.

If anything was different, it was that the "bull rush" by the Portland police and state troopers looked meaner than it's been in a while, perhaps even meaner than the infamous Saturday night showdown in Laurelhurst. More knocking people over, more manhandling. The protesters, some of whom had thrown various objects at the cops, were complaining that the cops were throwing rocks back at them.

The police say the objects thrown by the crowd included eggs and potatoes. Make up your own joke.

The police DJ From Hell kept announcing that the area around the precinct was closed, but the boundaries of the closure seemed to be whatever individual officers said they were at any given point. Along with the mysterious trigger point for the ritual declaration of an "unlawful assembly," the protesters will probably be complaining about the vagueness of the closure for a while. Of course, the protesters blocked the street for an hour or so before the constables did their charge. In that sense, they closed the area themselves.

Apparently, no one was allowed to get too close to the precinct building. Given what's happened on so many nights since the protest show debuted, this pre-emptive action seemed reasonable. But I wouldn't be surprised if the protester group argues that a proactive approach is somehow illegal.

Nine people were arrested, police said, including people from Minneapolis; Tehachapi; Scappoose; Long Beach, Washington; and the 'Couve. We'll see what happens to them and their Portlander cohorts. Yesterday a prominent protester who had been arrested on Sunday night, Demetria Hester, walked away from jail without being charged. Apparently the new county district attorney, Mike Schmidt, didn't think it was worth it. She was back out there last night. No doubt she'll be back again tonight, wherever the show goes.