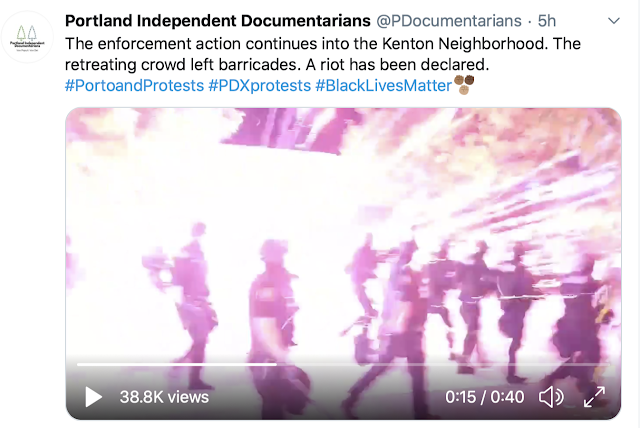 This is not a good place to go for a play-by-play on the Sunday night Portland protest. I didn't follow things that closely. The nightly reruns are no longer all that interesting. They are redundant. Of course, that's when somebody gets killed, and so I guess we should be watching. But after a while, fatigue sets in.

I gather that the demonstrators went back to the police union office where the arson happened Saturday night. But they weren't allowed to hang around, or even to get their show started. The police declared a "riot" almost immediately and went right into the "bull rush."

There were a lot of arrests. The Twitter types were all complaining that the arrestees were just standing there, they were on the sidewalk, they're members of the "press," etc. I guess a judge or two will be sorting it all out later today.

Shown above is a big commercial-grade firework that a demonstrator threw into the parade of on-marching cops. Suffice it to say, the crapshow continues.

UPDATE, later that day: The police's version of events is here. They arrested 16 people, including a prominent Black protester, Demetria Hester, whom they list as 46 years old.