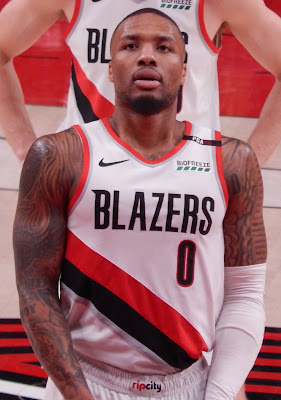 They're playing professional basketball in a protective "bubble" in Orlando these days. The NBA has 22 teams competing in Disney World gyms without spectators present. The league is picking up the season where it left off in March. They have done a great job with the TV staging to make it as interesting for the home viewers as a normal season. If you're like me, having basketball back, even at the wrong time of year, is soothing.

In some ways, it might even be better than normal. There's no home court advantage and no crowd to affect the referees' calls or the players' performances. It's pure basketball.

Anyway, we've come down to the point in the abbreviated "restart" where teams "go fishing" – that is, they're eliminated from further play. And lo and behold, the Portland Trail Blazers find themselves in a must-win game tonight, starting at 6:00. They're playing the Brooklyn Nets. If the Blazers win, they advance to a "play-in" game or two over the weekend against the Memphis Grizzlies. If the Blazers lose, they'll be on the next plane home, and the Phoenix Suns will deal with the Grizzlies.

The Blazers' main big men were hurt for most of this year, but the pandemic shutdown gave them a chance to heal and they're back on the floor. The Blazers' superstar, Damian Lillard, has been going nuts, scoring like a machine. In his last two games, he's put up 112 points.

The Nets don't care much, probably. They're in the playoffs regardless. But for Portland, the pressure is on. I hope they get it done.

UPDATE, that night: The Blazers held on to win! But just barely. Brooklyn's main man, Caris LeVert, had the last shot, and he got a decent look. But it didn't go in.

The Blazers earned it. They were working hard. But they couldn't stop the Nets from offensive rebounding, which was costly.

In the unusual schedule for the Season of Covid, the Blazers need to win just one of two games against the Griz this weekend to advance to a full playoff round against the top-seeded Lakers.