I know you got Seoul

I don't think I'll ever forget that night in March when they shut down the National Basketball Association because of the coronavirus pandemic. The news came right in the middle of a game that was being televised. The whole world got to see Dallas Mavericks owner Mark Cuban's stunned expression when he got the text. 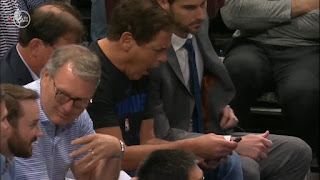 Up until then, everyone was whistling past the graveyard about what the deadly plague would mean. But sending Charles Barkley home early got the world's attention. Indefinite cancellation of pro basketball, just as the season was hitting its stride, was a brave thing for the league commissioner, Adam Silver, to do. Within a day or two, all the other sports followed suit.
I was also impressed with Cuban. The courtside reporter asked him, What about the season? And Cuban said, hey, come on, this is way bigger than basketball. What about our parents? Will they die? Can we send our children to school? What about all the people who earn an hourly wage at the arenas? He said all this off the cuff, from the heart, immediately after hearing the news.
His stock went way up in my book, as did Silver's.
But withdrawal from live televised sports has been tough. Basketball provides soothing warmth through the endless rains of spring. And the pro tennis circuit keeps me occupied all spring and summer. We had had a fine Australian Open to watch, and the red clay of Europe had been beckoning. By now they'd be on grass, heading for Wimbledon, to which I made a pilgrimage toward the end of last year (a post for another day).
I also had started dabbling in legalized sports betting on my phone, having placed $25 down to get started and still having about half of it on deposit. (Don't worry, I wager a dollar or two at a time.) But when it all shut down, there was nothing to gamble on. No March Madness, no spring training, zip, nada, cipher. At one point all that Oregon Scoreboard could give you odds on was table tennis.
But then the Korean baseball season started up, after a brief virus-related delay, and they started showing games in America, live on ESPN. Of course, "live" means a 2:30 in the morning start time on the U.S. West Coast, but those who know me can tell you that that's prime time.  Particularly when there's nothing scheduled for the next day. 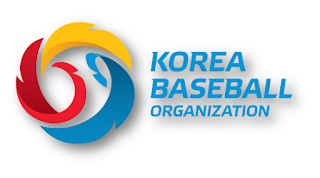 It's actually decent baseball. The "KBO" game is played according to almost all of the same rules that are employed in the States. Nine innings, three strikes you're out, four balls take your base, all that. They use the designated hitter.  But there are no extreme marathon games -- after 12 innings, if the score is tied, it's a draw.
The fan base is reportedly quite devoted and exuberant, but you wouldn't know it by me, because this season, due to the 'rona, the games are played to empty stadiums. Other than the teams and their staffs, the only people around seem to be broadcast crews and cheerleaders. The cheerleaders have elaborate dance routines, and apparently a song for each player, but there's no music these days.
The players are not masked, but the coaches and umpires are. Backside slapping and hugging are nowhere to be seen, although a little high-fiving and head-patting occurs.
There is no spitting or crotch grabbing. I don't know if that's due to temporary Covid rules, but I doubt it. Things are more polite than in America. And nobody argues with the umpires.

The ESPN crew calls the games from their homes. They are just watching the video feed from Korean TV and describing what they see. Sometimes they can't tell for a few seconds what just happened. And they spend a lot of the time talking about major league baseball in the U.S. They don't quite disrespect the Korean game you're watching, but they almost do.
There is one league, with 10 teams. A team plays each other team an equal number of times. Each team plays about 140 games over the summer, and then there are playoffs. The team that finishes first in the regular season standings is automatically advanced to the World Series. Several other teams battle it out for a chance to play against them in the finals.
They import players from the U.S., but not many. I think each team is allowed to have only three or four guys on the roster who were not born in Korea. The American men are bigger and stronger than all, or nearly all, of their teammates. At least one American on each team is a starting pitcher. The Americans throw harder than most of the Korean hurlers.
Some of the players are familiar to die-hard American baseball fans. A few of the Koreans have played in the U.S. majors, and the Americans are all refugees from big league teams in the States. It doesn't seem like much of a demotion, though -- after all, they are playing and getting paid at the moment. The major leaguers in America aren't. 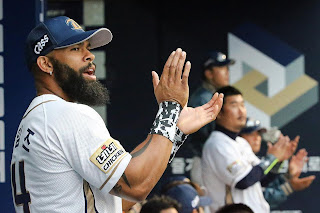 The teams are named in part after corporate sponsors, rather than their home cities, and so you get monikers like the Samsung Lions and the LG Twins. Picture the Moda Trail Blazers or the Amazon Yankees.
The Doosan Bears are the reigning champions, but this year's NC Dinos are ripping it up in the early going. The Dinos took two out of three from the Bears this week.
One refreshing aspect of the Korean game is that there aren't a lot of home runs and strikeouts. My biggest problem with American baseball is that it often seems like homers and strikeouts are all that's left. But the Koreans are contact hitters. They swing at stuff out of the strike zone and hit singles and doubles. That's their value system. They run bases. It's entertaining.
The pitching is funny. Most of the starters can get the job done for half a game, but nearly all the bullpens are shaky. Count on a scoring burst or two in the late innings. The over/under might be 10.5 or even 11.5. If it's 2-1 in the sixth and you've got the over, relax, you're still in it.
Maybe the nicest thing to see is that the players laugh at themselves sometimes. They don't take the game too seriously, as their American counterparts do.
And I've got to say, from my armchair perch, nothing is lost by not having fans in the stadium seats. If anything, you focus on the game more. But that's easy for me to say, never having seen the full spectacle of a Korean game. I may be singing a different tune later this summer if I'm watching a Cubs game telecast from an empty Wrigley Field.
If you've got a sports jones haunting you these days, set the recorder to tape a Korean baseball game. Play it for yourself at a convenient time. You may not care if you never get back.
Labels: International Sports