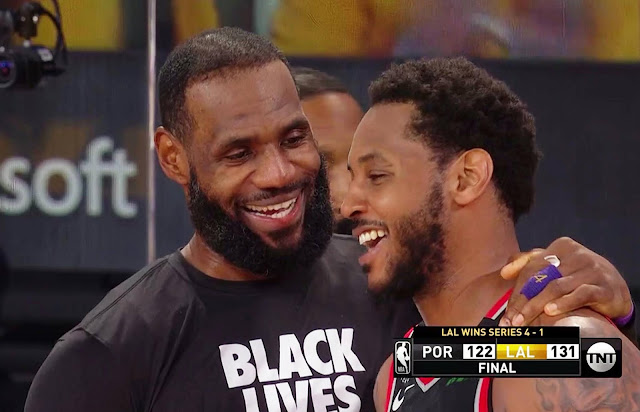 We knew the end was near, and so the outcome of last night's season-ending Blazer game wasn't a shock. The restart of the restart ended just as it was getting re-restarted. But the game was actually entertaining for most of the night.

Almost halfway through the fourth quarter, the score was tied. C.J. McCollum and Carmelo Anthony pumped in a lot of points. Anfernee Simons played well. Jusuf Nurkic rebounded okay and passed excellently, but shot poorly. Gary Trent, Jr. played almost the whole game, shot decently, and defended as well as anyone can against the Lake Show. Hassan Whiteside was a bum. Wenyen Gabriel didn't play due to some sort of last-minute injury.

With about six minutes to go, Portland turned the ball over several times, and that was that.

The Blazers all wore headbands in honor of the late Uncle Cliffy.

And so the craziest season in Trail Blazer history comes to a close. Out of the "bubble" and home to an uncertain fall fly the Portland hoopsters. But wow, did they ever give us a great month.

Wait 'til next year! Or whenever. I think they're supposed to start playing again in December.