The core of the problem 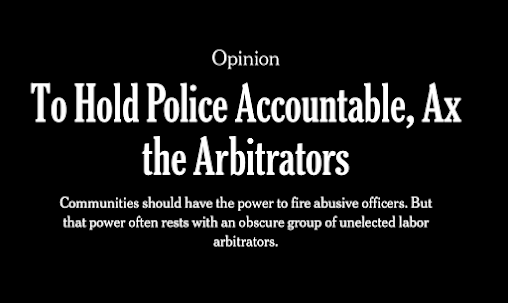 The New York Times has an important editorial up right now, with which I agree 100 percent.

If you want to "quell" the protests, if you want to start the long process of changing police culture, there's only one place to start. And that's with the police union contracts, particularly their binding arbitration clauses.

Of course, the Times says it better than I could. The whole thing is here. Some highlights:

It doesn’t matter how much a police department overhauls its use of force policy, or how strictly a police chief enforces those new rules if unelected arbitrators reverse the punishments of officers who violate the rules....

Police officers are not like other workers. They carry guns and have the ability to deprive members of the public of life and liberty. A labor arbitration process that prioritizes the rights of individual officers over the community’s right to freedom from abusive police officers demands reform....

In Oregon, state lawmakers passed a law this summer that curbed the power of arbitrators to change punishments in certain cases. (Efforts to place similar curbs on arbitrators had failed to garner sufficient support in previous years.) State lawmakers could also change how arbitrators are selected. Minnesota lawmakers just passed a law that made arbitrators appointees of the governor, making them more accountable to democratically elected officials and the community.

Much more needs to be done to reign in the power of labor arbitrators, but at least it is a start. Cities that are interested in taking this on could look at municipalities in California, like Burbank and Cathedral City, that have hybrid systems where arbitration decisions are nonbinding. Officers still have the right to argue their cases before a neutral body, but the ultimate decision to terminate an officer is left in the hands of the city manager, who is accountable to the community. That’s where it belongs.

The mayor and the rest of the Portland City Council have made zero headway on this issue, despite it being so obvious. It's time to hold their feet to the fire on it. The current police contract expires next June 30.