Old-school protest goes off without incident 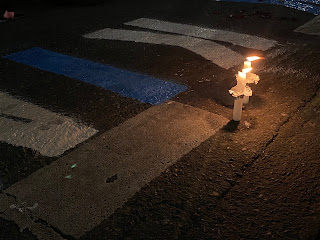 There was a protest in downtown Portland last night, the second anniversary of the death of Patrick Kimmons at the hands of Portland police. A crowd estimated as 300 to 400 people gathered at Pioneer Courthouse Square and marched to Third and Harvey Milk (formerly Stark). There were speeches, chanting, a moment of silence, and music.

A beautiful evening down at Pioneer Courthouse, where several hundred #blm protesters have assembled for a memorial to Patrick Kimmons, killed by 9 shots from the PPB, 2 years ago today. The music was just wrapping up as we arrived. There’s also borscht! For your family! pic.twitter.com/pAD3DdZZ9b

At least one of the speakers taunted the guests in the adjacent hotel. I don't know for what – just being there, I guess.

Streets were blocked, but on this night, the police didn't use that as a pretext for arrests or brutality. There was a report of a car driving erratically on the edge of the crowd, but that was all I could see by way of any violence. No one was hurt, and no one was arrested.

Maybe the police's hands-off attitude can be explained by the fact that they were busy investigating a major shootout at Dawson Park near Emanuel Hospital. The same type of gun violence that led to the death of Kimmons. It doesn't seem like we're learning much, does it?