Back in the first run of this blog. my favorite Portland City Hall figure was the city auditor, Lavonne Griffin-Valade. She came into that position and really did something with it. She told it like it was, even when Mayor Creepy and Admiral Randy really didn't want to hear it. I urged people to write her in for mayor in 2012 over Char-Lie Hales. I was disappointed when she left city government. She went off and got a master's degree in creative writing.

I still wish she'd come back to lead the city. She'd be a much better mayor than any we've seen since Bud Clark. 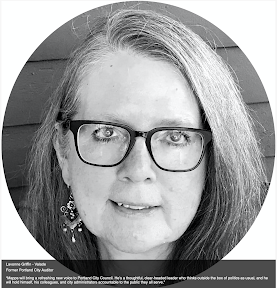 Anyway, an alert reader and fellow Lavonne fan points out that Griffin-Valade has endorsed Mingus Mapps for the City Council seat currently occupied by Chloe Eudaly. For me, that seals the deal. Interestingly, Griffin-Valade endorsed Eudaly four years ago, but I guess she, like so many of us, was underwhelmed by where that led.